Susan Simpson has been writing stories and poetry ever since she penned her first poem at the age of six. Her latest book is The Promise (Zebra Books), the first in her Southern Maryland Amish Romances series. In this interview, Susan shares what readers can expect from the series, the role that faith plays in The Promise, and how she gets the Amish details right…

What inspired the story in The Promise? 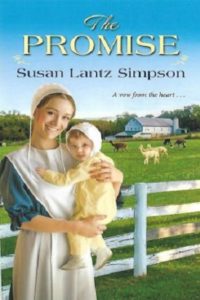 Two things inspired the story in The Promise. First, I wanted to write about a character who didn’t quite want to conform to the norm—not right away. Phoebe didn’t yearn for a husband and family immediately, like most girls her age. She wanted to do something else first. Of all things, she wanted to raise alpacas! Then, after visiting a friend’s alpaca farm several times, I knew I had to include the funny, lovable animals in a story.

Would you introduce us to the main characters?

Phoebe Yoder is the oldest child in her family and takes her responsibilities seriously. She is devastated when tragedy befalls her family and blames herself.

Benjamin Miller has returned to the community to help his aging grandparents. He, too, wants to raise alpacas. The more time he spends with Phoebe, the more he likes her, but can he help her resolve her guilt?

Micah Graber is “the villain.” He is not patient or understanding. He is convinced Phoebe belongs with him, and the sooner she realizes this, the better.

What connects together the books in the Southern Maryland Amish Romances series?

There are three novels planned for the series at this time—The Promise; The Mending, out this August; and The Reconciliation, out March 2019. All will follow a main character who struggles to overcome an obstacle. All three books are set in St. Mary’s County in Southern Maryland. The stories and characters are purely fiction, and place names have been changed, but all are based on “real life” in Southern Maryland.

What is the role that faith plays in The Promise?

Some element of faith sneaks into all my novels. My characters, like Phoebe, grow in faith as they learn about themselves and strive to overcome a problem.

What was the most challenging part of writing the story? Which characters surprised you? 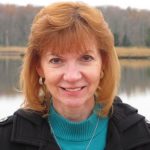 Probably the most challenging parts of writing any novel are keeping the characters believable and keeping the story moving.

Characters sometimes have a way of demanding their own way, which can keep things interesting and surprising. Although I knew Ben Miller would be a nice guy, he turned out to be very smart, very sensitive, and very patient. His grandmother, Lena Kurtz, developed into a wonderful, wise older lady with a great sense of humor. Also, Martha, Phoebe’s younger sister, made some significant changes by the end of the story.

How do you approach writing about the Amish in a way that’s accurate to their way of life?

I’ve done a lot of research on the Amish, read many books, and talked to Plain friends. It seems that each community in each area of the country has its own quirks and traditions. The Pennsylvania Dutch language is more a spoken language than a written one, so spellings vary from place to place.

I tried to adhere to basic tenets of the Amish faith and show how life is lived in Southern Maryland. But people are people. We all have joys and sorrows, problems and blessings. We all grow and learn—Amish and Englisch alike!