Illustrator Brenna Thummler teamed up with writer Mariah Marsden to create Anne of Green Gables: A Graphic Novel (Andrews McMeel Publishing), based on Lucy Maud Montgomery’s timeless classic. Readers of all ages can explore the violet vales and lush greens of Avonlea as the mischievous red-headed orphan springs to life in this crisp adaptation. In this interview, Brenna explains what she loves about Anne, the challenges of collaborating on such a large project, and why this story of a young girl living in the late 1800s is still relevant today…

What inspired you and Mariah to translate this iconic book into a graphic novel?

If given the choice of any classic to illustrate in graphic novel form, Anne of Green Gables was my first. I grew up with the story of Anne, and related to her wild imagination and eccentricities. I know Mariah reacted in a similar stunned and ecstatic manner—we were unbelievably fortunate to be paired on this project, alongside our editors who grew up loving the story as well. We still refer to ourselves as “Team Anne.”

Obviously, the world has changed a lot since the novel was first published in 1908. In what ways do you think Anne’s story is still important and relevant today?

Anne Shirley’s personality is as fiery as her hair. She is inquisitive, tenacious, and captivating, and above all, isn’t afraid to dream. She pulls everyone into her own stories—invites them to her world—rather than adapting to the world around her. Everyone, especially kids, should look to Anne as someone who celebrates her differences and her own self-worth. Sure, she struggles with her red hair and freckles, but she is still fierce against obstacles. She works hard to rise to the top, even in a male-dominated society. Women’s rights have improved since the original novel was published in 1908, but inequality is still an issue. Anne is the strong, intelligent heroine that today’s women can look up to.

Can you tell us a little about the process of creating this version? What was involved in translating this novel into sequential art?

First of all, I was fortunate to have Mariah in such close proximity. Not only is she a dear friend and talented writer, but we were able to collaborate from the very beginning. This made the process less intimidating, especially as this was the first graphic novel for both of us.

Collaborating on a graphic novel is a huge challenge. You have a writer doing her own thing and an artist doing her own thing, but somehow they have to come together and create a perfect whole. Because graphic novels are visually driven, I wanted to give Mariah an idea of what was developing inside my head—an artistic language that was foreign to her. I created a written list of story events based on my mental sequencing, suggesting where I felt dialogue was needed, and let her run free. As she adapted the story into a graphic novel script, I storyboarded, or roughly sketched the entire layout of the book (after I had conducted a great deal of time period research, of course!).

Graphic novels are kind of like movies, but in book form. Each panel is like another piece of the scene, and you get to watch the story come to life before your eyes. So I sort of thought of myself as a filmmaker as I was creating the storyboards. So much goes into this stage. You have to consider how many pages to spend per scene, how many panels you’ll need per scene, the size and composition of every panel, where to zoom in and out, which scenes to make active or calm, where to turn the page to make the story flow—the list goes on.

Most people don’t realize how much planning goes in to this very early step, before you even begin the final drawings. The final line art took me about eight solid months of work to complete, during which I questioned whether I was an artist or Dracula, because sunlight did not exist in my world. I work traditionally with pencil on Bristol board, then scan the drawings into Photoshop and add color and text digitally. These digitized illustrations eventually become the artwork you see in the book.

What were the biggest challenges of adapting this story to this format? 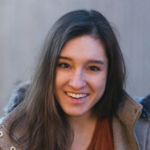 I don’t think there were any challenges of adapting this particular story to a graphic novel format; L.M. Montgomery created such a visually stimulating piece that I feel it naturally translated to sequential art. I think most of the challenges came from the fact that this was my first ever graphic novel, an overwhelming task that began with me staring blankly at blank paper and asking myself, “What now?” and “How could you say yes to this, are you insane?” I had around a year to create a 232-page book—hundreds of illustrations—and it was terrifying. It was also one of the best decisions of my life.

Because of the bulk of a graphic novel project, crammed inside a tight schedule, you don’t have time to go back and make massive changes when you finish. For example, if you reach the end and decide a different color scheme or drawing style would have been better, you’re out of luck. You have to settle with your gut instinct at the very beginning, and accept the fact that you might regret some of these decisions at the end.

And thus, another challenge was improvement over time. I’ve never learned so much about drawing, story, composition—you name it—and when I finished the project, I was so much better than when I started. I immediately wanted to start over again with the newly acquired knowledge, but regrettably, I can’t keep creating updated versions of Anne of Green Gables for the rest of my existence. I sort of had to view this as a learning experience and preparation for my next book.

How much did you love working on Anne of Green Gables?

I would like to close with the joys I’ve had working on Anne of Green Gables. To recreate a classic is to tell one of your favorite stories your own way, and it’s a tremendous gift. Thousands of hours went into creating the art, and I have grown so much as an artist and as a person. I hope children, as well as adults, become increasingly interested in graphic novels, because visual language is unique and enriching and impactful.