When John MacLeod and his wife were delivered from a cult, he became devoted to studying and memorizing portions of the Bible to defend himself from false teachers. His fantasy series The Saga of the Singing Sword Brigade is the outcome of their spiritual journey, including their escape from deception. The second book in the series is Into the Gloom (Ambassador International). In this exclusive interview, John shares the inspiration behind the plot, reveals which characters surprised him, and gives us the big picture view of the series…

What inspired the plot in Into the Gloom?

Into the Gloom follows Inception of a Brigade, the story of Artka Kway, son of a power mogul in an evil empire who after being arrested as a highwayman is coerced into joining the empire’s armies. Artka is disowned by his father for the disgrace he brought upon the family. Jeda, Artka’s fraternal, twin sister, is also disowned “because she doesn’t fit in” like the other set of twins who mirrored their parents’ character of greed and pride.

Since I related how Artka was rescued from the empire during a battle and invited to join the king’s forces and the ensuing struggles he faced to maintain his freedom from the evil empire in Inception , it only seemed fair to follow Jeda into King Elyon’s realm as she too meets Logon Xychirion, the king’s son and heir.

Thus, Gloom is about Jeda being wrenched out of a life of luxury and sent to a life of abject servitude in the emperor’s palace. There she befriends a girl who is secretly an Ecclessite on the palace staff, but sneaks out to attend clandestine, underground kingsmen meetings in the heart of Cosmopolis. She invites Jeda along.

As Artka fought against Logon then realized Logon was the true lord of the world and yielded to him, so too, Jeda meets Logon just as so many believers in oppressive nations must go underground to find truth and be “rescued” by Jesus. Jeda’s story is that of underground believers. Jeda, like them, must live a cautious existence, yet be daring and bold enough to heed her liege’s prompts when he wants her to evangelize.

Which character(s) in the book surprised you as you were writing Into the Gloom? 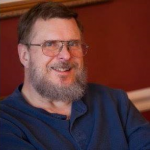 I needed a villain to treat Jeda harshly both before she meets Logon, and especially afterward to jeopardize Jeda’s relationship to her new liege. Enter Hod-ya Kar Psa, mistress and overseer of the emperor’s palace as well as major policy-broker working day and night to capture, torture, interrogate and eliminate Ecclessite kingsmen found anywhere in the empire.

She has cultivated personal contacts with certain of the ten dreads that enforce the emperor’s dictates, “Live for the Moment; Die for the Empire,” thinking that she is in charge of them when actually, the spirit warlords are playing her along, using her to eventually betray her.

Hod-ya exudes malice and wields power over Carnalia as if she were its regent. She has specially conditioned “dronnets,” not unlike a gestapo corps, that do her bidding.

What can you tell us about the Singing Sword Brigade series? What ideas or characters connects the books together?

I started writing “The Singing Sword” to be a sort of fusion between “Lord of the Rings” meets “Pilgrim’s Progress,” but renamed it “Inception of a Brigade” because several other writers named their creations The Singing Sword.

The sword is central to the series as Logon Xychirion crafted these weapons that do not injure or kill; but rather, it wounds the conscience when it pierces a person’s heart and reveals how corrupt the wounded person has been all their life, but was unaware. The sword also presents Logon’s life as the only acceptable standard King Elyon will allow into his kingdom of Splendora.

But to attain that degree of worthiness, one must meet Logon at the rock where the crown prince was impaled and died. Each kingsman must willingly choose to touch the rock, thereby acknowledging their part in killing him, even though Logon’s death happened ages ago.

Logon died to give all who would trust him, and give up their corrupt Carnalian life to take on Logon’s resurrected life, and live henceforth for the king. Thus, Logon arms his warriors with weapons that cause no physical harm but rather, make each person aware of how they’ve offended the King of Ecclessa and Splendora.

As kingsmen toll (hone) their swords with a special file (toller) Logon gives them, runes light up on the blade, giving instruction on how to live kingdom life as well as issuing timely orders when in battle or in difficult situations. The more one “tolls” his sword, the more glow comes along the edge of his sword, helping the warrior know and love Logon better.

Logon’s desire for them is to light up the entire sword, though most brigades only care to sharpen parts of the blade, and thus their brigades are known by how they sharpen their swords becoming designated as “Sharpointers,” “Tipsters,” “One-Edgers,” “Runers—because they only sharpen by familiar runes” and “Full-Bladers,” who intend to light up their entire sword.

The more light a kingsman has on his sword the more successful he is in rescuing Carnalians in battle, as well as being victorious over various invisible, spirit entities that whisper discouragement or outright threaten as they assume visible forms and attack.

The Ecclessite brigades are summoned by Logon to gather for a final push into Carnalia and attack the emperor’s impregnable castle, but too many kingsmen brigades are ill-prepared with unlit swords, or else at odds with other kingsmen for not sharpening the swords the same way they do.

Jeda and Artka, individually have come into the kingdom for just such a time. Their lessons from Logon prepare them for subsequent encounters with Carnalians and those who claim to be kingsmen but are false, as well as skirmishes with the evil spirit agents such as cusps, tophets, firedrakes, dreads, etc.

How does Into the Gloom fit into the larger picture of the series?

Jeda is selected by Hod-ya to represent Carnalia against Craniantium’s warrioress in the deadly gladiatrix contest held once a year in Pitland. If Jeda succumbs to Hod-ya’s reconditioning and training for the match, she will lose all that Logon has done for her, but if she succeeds and follows what Logon has taught her… she’ll be discovered as an Ecclessite and summarily executed.

What happens in Pitland, as Into the Gloom and its soon coming sequel The Trumpets of Doom depicts, will have major impact on whether the Emperor of Carnalia or the King of Splendora and Ecclessa will tilt the balance of power and win the centuries-old war, as recorded in books four, The Seige Of Logon’s Bridge; book five, Turit’s Rise; and book six, Tremendum.

What do you hope readers come away with after reading Into the Gloom?

My intent in writing this series is to encourage Christians of all ages to recognize the signs of spiritual warfare that abound in our world. I want to inspire believers, young and old, to know their Bibles, not just casually read them, but to understand and apply the principles that our Lord Jesus and the prophets and apostles taught as non-negotiables in our new lives.

I’ve had many readers contact me, saying how much they recognized their need to refresh their relationship to the Lord and get more involved in Bible study, prayer, evangelism and spiritual counseling with those who are struggling in their Christian walk. Some have told me they are ordering several books for book club discussions and others are making disciples by comparing the Bible to events in these books.

My hope is that believers will take the Gospel seriously and actively seek to win souls and defeat Satan and his nefarious hosts by loving, forgiving and gently piercing non-believer’s hearts with the Word of God. 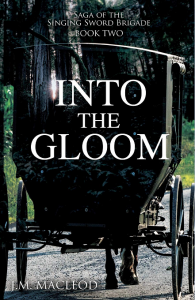