Terry Brennan is the award-winning author of The Jerusalem Prophecies series, including The Sacred Cipher. He was the leader of a Pulitzer Prize–winning journalism team and has received the Valley Forge Award for editorial writing from the Freedoms Foundation.

His brand-new Empires of Armageddon series kicks off with the thriller Ishmael Covenant (Kregel Publications): At the end of his rope, Diplomatic Security Service agent Brian Mullaney is banished to Israel to guard a U.S. ambassador and an insignificant box. Little does he know that this new job will propel him straight into a crisis of global proportions.

In this exclusive interview, Terry explains the prophetic underpinnings of the new book, what to expect from the trilogy, and how his background as a journalist impacts his fiction…

What inspired the story in Ishmael Covenant?

I had one idea. That three ancient empires of the East–Persian, Ottoman, and Islamic–appeared to be on the cusp of rising again.

Taking that idea, I wondered how this potential clash of empires might impact current history, future events and the viability of the Jewish state. One conclusion was that an emergent Persian Empire–an alliance between the majority Shia governments of Iran and Iraq–would drive their ancient enemies, the Sunnis of Saudi Arabia, into a treaty and mutual defense pact with, of all people, Israel…hence, the Ishmael Covenant.

One afternoon, my wife, Andrea, and I ran that idea past Nick Uva, Associate Pastor at Harvest Time Church in Greenwich, CT, a profound teacher and man of great Biblical understanding. We spent a couple of hours knocking that idea around, considering its implications under the lens of Biblical prophecy and measuring it against a number of end-times scenarios.

And then Pastor Nick asked, “Have you ever heard of the Vilna Gaon?”

No. But it didn’t take me long to look him up.

The Genius of Vilnius, or Vilna Gaon, Rabbi Elijah ben Solomon Zalman, was the most revered Talmudic scholar of his time, the late 18th century. In 2014, his great-great-grandson revealed a prophecy the Vilna Gaon wrote two hundred and twenty years in the past: “When you hear that the Russians have captured the city of Crimea, you should know that the Times of the Messiah have started, that his steps are being heard.” In the spring of 2014, Russian troops had invaded the Ukraine and swept through the Crimean Peninsula.

I took the idea of the rising empires, the premise of an unexpected treaty between Israel and all its Arab neighbors, wrapped it up in the Vilna Gaon’s prophecy, speculated that the Gaon wrote a second prophecy that was yet to be revealed, and started writing.

As a writer, I’m a gardener (not an architect). I plant a seed, water it, let the sun shine on it, and watch to see how it grows. That seed grew into the Empires Of Armageddon series.

What can you tell us about the Empires of Armageddon series? What themes or characters will tie the books together?

The three-book series The Empires Of Armageddon is a fast-paced, modern-day international thriller, constructed around historical fact and historical fiction. The driving premise of the series is that no man can change biblical prophecy, but one man can change history.

Out of the chaos and conflict of today’s Middle East, it appears that three ancient empires are about to resurrect themselves–the Persian, Islamic and Ottoman Empires. Ultimately, each of those empires will covet the same slice of land which they once ruled–from the Fertile Crescent of Mesopotamia to the rocky desert known as Palestine. The collision of those competing empires could trigger the climactic events in the Valley of Megiddo.

In the series, one byproduct of these growing empires is an unexpected peace treaty and mutual-defense pact between Israel and its Arab neighbors–Egypt, Jordan, Saudi Arabia and most of the small, Persian Gulf states—the Ishmael Covenant.

The core of the action in all three books takes place over the span of just a few days in July of 2014. The story envelopes the lives of nearly a dozen key characters, but is driven by three primary characters: Diplomatic Security Service Special Agent Brian Mullaney; his assignment, the newly appointed US ambassador to Israel, Joseph Atticus Cleveland; and their unknown but evident enemy, The Turk, an immortal agent of evil who serves The One.

Cleveland, and then Mullaney, accept a responsibility–guardian of the Gaon’s second prophecy and the lethal box that protects it–that puts both their lives, and the lives of those they love most, in terrible peril. Mullaney is eventually anointed as the final guardian of the Vilna Gaon’s second prophecy, planting him in direct opposition to The Turk. The Turk and The One have been focused on a singular purpose for over two hundred years–if they can prevent the fulfillment of one Messianic Biblical prophecy, they can eradicate the validity of all prophecy and change the end of the Book … the outcome of the Battle of Armageddon.

That theme of ultimate evil trying to overthrow the plans of God, fuels the story of the Empires Of Armageddon, which utilizes this geo-political cauldron and its Biblical ramifications as the backdrop for an epic testing of one man’s character when faced with multiple adversaries who threaten his family, his faith and his country. How Brian Mullaney responds to his calling could dictate the fate of this world–and the onset of the next.

How does this series compare/contrast with your Jerusalem Prophecies series?

While the Jerusalem Prophecies series is more of an Indiana Jones type ‘search for the missing …’ adventure yarn, Empires Of Armageddon is more of a Jason Bourne type international political thriller. The action in both series takes place primarily in the Middle East and in one area in the US (New York City area in the first series; Washington, DC area in the second).

Both series are structured around a similar protagonist–a Christian man, accomplished and successful in his career, who is enlisted … called … into a life-threatening situation beyond his sphere of experience and understanding. This lethal danger, projected not only against the man himself but also against his family, is perpetrated by a shadowy gang of murderous thugs who ruthlessly pursue our hero from one country to the next.

One complicating factor is that our protagonist realizes the spiritual implications and consequences of the deadly conflict into which he was recruited. As a result, his faith and character are challenged to the utmost as he confronts a relentless string of obstacles to fulfilling his call.

While I wouldn’t exclusively characterize either series as “end-times thrillers,” each of them has an underlying tint of last-day’s events … how the quest of the protagonist may ultimately reflect or affect Biblical prophecies … Empires being more overt. But, primarily, they are stories of good against evil, and how that conflict plays out in the life of just an ordinary guy.

How does your background as a journalist impact how you’re approaching these stories?

Interesting question, which I hadn’t considered.

There are parts of Tom Bohannon’s history (Jerusalem Prophecies) which are autobiographical. One aspect of Bohannon’s background, as is mine, is that he was a former journalist who once worked for The Bulletin in Philadelphia.

Journalists are trained observers. We absorb, analyze and report on what we see. When I write these books, I see them as movies. In other words, I’m writing what I see in my mind. Which is similar to what I did as a journalist–primarily my ten years as a sportswriter. I would watch an event and then try to accurately recount it for my readers.

I’ve done a ton of research for both of these series, which gave me a great deal of pleasure. I’ve discovered so much that I never knew before, and I’ve been able to weave many of these current and historical facts into the fictional narratives. I seldom needed to do such extensive research for the work I did as a journalist, but the process was similar.

Perhaps the most tangible result of being a journalist is that I approach my writing as a gardener, not as an architect. Architects are the writers who have everything planned out and plotted out before they get started, including extensive biographies for all their key characters and a detailed outline that is a roadmap for the entire book.

Journalists don’t have the time for such exhaustive planning. You watch a game … you’re on deadline. Write the story! Even longer, or investigative pieces–though they would naturally have some structure–are generally written the same. You have an idea, or an assignment, and you start writing. And see where it takes you.

In writing novels, the process is often to see where my characters take the story. They reveal themselves to me as I write.

One of the first things I learned as a writer, is that novels are not written in the same way newspaper stories are written. I had to throw away my first novel because of that. But, now that you’ve asked, I can see the connections between my two decades in journalism and now my nearly 15 years as an author. Yes … I do write slow.

What do you hope readers take away after reading Ishmael Covenant?

I hope that readers of Ishmael Covenant, and all the books of the Empires Of Armageddon series, understand that Christians are in a real, tangible war. Believers in Jesus Christ are engaged in what the notes in my 1985 NIV Study Bible call a “titanic conflict”. (Ephesians 1:3 “heavenly realms”): “… in the Christian’s union with the exalted Christ, ultimate issues are involved … At stake are God’s eternal eschatological purpose and the titanic conflict between God and the powerful spiritual forces arrayed against him …. As a result, the spiritual struggles of the saints here and now is not so much against ‘flesh and blood’ as against the great spiritual forces that war against God in heaven.”

There are great spiritual forces that war against God in heaven? Interesting thought. More sobering is the idea that my ‘spiritual struggles’ here on earth have, in some way, an impact on that war in heaven.

Not all of us will come face-to-face with evil incarnate, as does Brian Mullaney and the other characters of Ishmael Covenant. But agents of evil are at work in the world today, just as they have been since Lucifer’s rebellion was crushed and banished to earth.

It’s likely that there are two reasons why those agents of evil are still fighting against the light:

I don’t generally live my daily life conscious of the part I play in this great spiritual battle in heaven. I most often perceive the evil I face as personal. So, I pray against the spirits of evil that try to ‘steal, rob and destroy’ in my life, in my family, in our marriage. Which is good.

But, through research for this book, I’ve learned that I need to reach beyond the personal conflict of good and evil in my life and be more conscious of the vastness of this titanic conflict around me. I need to be an example, a reflection, of Jesus and his love for all souls.

And I need to stand up for light–to be a warrior/ambassador for light–in the midst of a dark world that often seems to be getting darker.

But the bottom line is inevitable. Good triumphs. The end of the Book will never change. 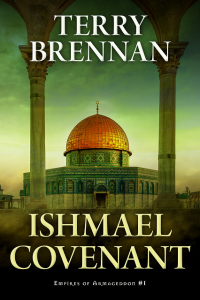