J.A. Myhre serves as a doctor with Serge in East Africa where she has worked for over two decades. She is passionate about health care for the poor, training local doctors and nurses, promoting childhood nutrition and development, and being the hands of Jesus in the hardest places. Her novel A Fever, a Flight, and a Fight for the World (New Growth Press) is the fourth book in her Rwendigo Tales series. In this interview, the author shares how a doctor in East Africa came to write the series, how her experiences have influenced the stories, and what connects the books together…

Jennifer, you’re a doctor in East Africa. How did you come to write the Rwendigo Tales series? 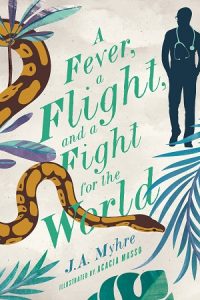 Hi Family Fiction, thanks for asking. When my own four children were younger, I decided to write them a story for Christmas. We lived in rural Uganda, near the Congo border, and I found that they had little to read that had any resonance with their actual experience.

They were all avid readers, so a new book seemed like a fun gift. For four years, I spent many months writing them a short novel which we would unwrap and begin reading aloud on Christmas Eve.

How have your experiences over there influenced or inspired these stories?

Each of the books is set in the Rwendigo region, a fictional area reflective of our East Africa experience. The words included in the glossary, the descriptions of the environment, the characters and their back-story, are all true to the area in which we lived.

I also chose to wrap the stories around challenges which were pervasive in the atmosphere of our daily lives: separated families, the experience of being orphaned, search for identity, rebel incursion, struggles to obtain adequate food and education, HIV/AIDS, Ebola, environmental destruction, poaching, illegal logging, etc. That may sound heavy or depressing, but I think you will find that the stories normalize these themes and show children who overcome these issues.

Because the stories do not ignore the experience of the majority of children in the world, but choose to acknowledge their struggle and then celebrate their resilience, I hope that they empower children who read them to live with hope as well.

What inspired the specific story in A Fever, a Flight, and a Fight for the World?

We lived through an Ebola epidemic the year this book was written. Our best Ugandan doctor friend died caring for patients in the epidemic, so his memory and example influenced the story strongly.

What connects the books in this series together? 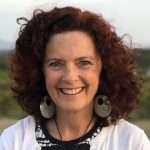 All of the books have a magical realism underpinning. There is a unified story of a mountain kingdom where truth and tradition have been preserved for the good of the surrounding region. Characters in each book are related to characters in another book.

Yet each book can stand alone. As the series progresses, the “Messengers” who come to the children in the form of animals, become more subtle, just as children grow up they may no longer be open to a talking chameleon but may see some guidance in the way a donkey shows up to lead them.

What do you hope readers come away with after reading A Fever, a Flight, and a Fight for the World?

I hope that my readers develop empathy for a part of the world they may have never seen. I hope they get lost in the drama of the story, and enjoy the way it unfolds!

But afterward I hope they sense that they too could make hard and courageous choices to resist evil. I think the power of literature is to allow young people to truly understand another’s story, and to imagine themselves within it.

A Fever, a Flight, and a Fight for the World
Rwendigo Tales #4
J.A. Myhre
New Growth Press