Christy Award-winning Amish author Leslie Gould’s newest set of books is a Time-Slip series. Piecing It Together (Bethany House), the first book in the Plain Patterns series, finds protagonist Savannah Mast abandoned by her fiancé a week before the wedding. Fleeing to her Grandmother’s farm to regroup, she becomes unexpectedly involved in the case of a missing local Amish girl, whose disappearance is eerily similar to another case several generations before. In this interview, Leslie shares with us what ties together the new series, explains why she’s chosen a new state to set these stories, and gives us a peek into the next book in the series.

Piecing It All Together is the first book in Plain Patterns, a dual-time, three-book series. What is a dual-time novel, and what is at the heart of these stories? 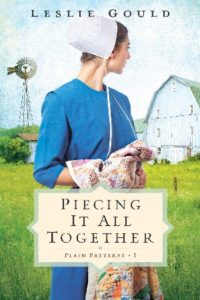 Dual-time novels, sometimes called time-slip or parallel-plot stories, have both a contemporary and a historical thread. At the heart of my Plain Patterns stories is Jane Berger, a sixty-five-year old Amish woman who owns a quilt shop that just happens to be called Plain Patterns.

Jane writes a historical column for a local paper and shares her research and stories with the women in her quilting circle. She is also empathetic, kind, and always looking for women who need to be supported and encouraged.

While Jane is the constant in the series, each story has its own contemporary protagonist who is informed and directed by the historical thread of the novel.

Piecing It All Together is set in Indiana. After setting most of your previous stories in Pennsylvania, why did you choose a new setting?

Yes, my previous stories were all set in Lancaster County, Pennsylvania, although a few characters did travel to other Amish communities in those stories. A research trip in 2011 took me to Nappanee, Indiana in Elkhart County for one of those earlier books.

One of my best friends, who now lives in the Pacific Northwest, grew up Amish in the Nappanee area, which also greatly increased my interest in it. I have returned to visit friends, meet new ones, and do more research since that first trip in 2011. I love Lancaster County, but I also really enjoy Elkhart County, too.

Do the Amish settlements in Lancaster County and Elkhart County differ?

Yes, there are several very visible differences. When you first arrive in Elkhart County, it’s immediately obvious that the Amish ride bicycles instead of scooters, as the Amish in Lancaster County do. Bicycles are used to commute to jobs, visit friends and relatives, and even do the grocery shopping. Even tandem bicycles are used.

Farming and small businesses are common ways to earn a living in Lancaster County, while more Amish men work in manufacturing in Elkhart County (although Amish farms are still a mainstay there).

Tell us about your main characters in Piecing It All Together. 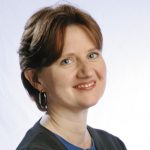 Savannah Mast is the main character of the contemporary story. As a girl, she spent the summers with her Amish grandmother in Elkhart County. When—as a young adult—her life is turned upside down, she flees her home in California, returns to Indiana, and ends up being befriended by Jane and the quilting circle. Savannah soon finds herself immersed in the mystery of a missing young Amish woman.

Emma Fischer is the main character in the historical thread of the story. She arrives in Elkhart County in the early 1840s, right after most of the Native Americans in the area had been forced west. However, a young Native woman has remained behind and befriends Emma. When the young woman’s life is threatened, Emma must choose between her own wishes to return to Pennsylvania and the needs of her new friend.

What can we look forward to in the next book in the series?

A Patchwork Past is the second book in the series and is also set in Indiana. It follows the contemporary story of Sophie Deiner, who returns to the Amish when she falls ill in hopes of finding rest, peace, and healing. Instead, she finds an immigrant family in need of justice.

The historical thread follows a young Amish woman, Mary Landis, who is in Chicago during the Great Fire of 1871. After she flees to safety, she’s burdened by the plight of the 100,000 people left homeless and yearns for a way to help them.

Piecing it All Together
Plain Patterns #1
Leslie Gould
Bethany House
Buy the book from our store!