The writings of C.S. Lewis have been engaging and challenging readers for generations—including his landmark fantasy series Chronicles of Narnia, classic fiction like The Great Divorce and The Screwtape Letters, to his numerous nonfiction works. Now a new biography offers a look at how Lewis’ formative years shaped the author he would become.

In November, biographer Harry Lee Poe and publisher Crossway are publishing the first in a biographical trilogy, Becoming C. S. Lewis: A Biography of Young Jack Lewis (1898-1918). Slowing down to focus on his younger years, this detailed portrait of “Jack” Lewis helps us discover seeds of what would inform his later writings—such as his delight in literature, his key relationships, his suffering and struggles, and his intense pursuit of joy.

A professor of faith and culture at Union University in Jackson, Tenn., Poe uses Becoming C. S. Lewis to explore the impact that the first 20 years of his life had on C. S. Lewis.

During this period, he developed all of his major tastes about what he enjoyed in life and what he hated. Many of the ideas that he would pursue in both his scholarly work and his popular writings have their genesis in his teenage years. [SOURCE: Publishers Weekly]

Poe also told the trade journal that “great writers do not write about themselves, but they do write about what they know.”

The world in which Jack Lewis lived as a boy in Ulster and as a teenager with his tutor in Great Bookham, Surrey, forms the landscape of Narnia. Readers will find the stuff out of which C. S. Lewis would later craft many of his most important works through the power of imagination interacting with experience. 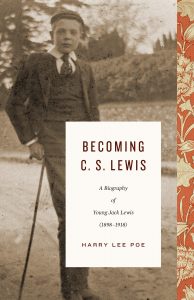