Professor Rob Currie has written two non-fiction books prior to his debut novel for middle-graders, Hunger Winter (Tyndale Kids), set during the Dutch famine during World War II. In this interview, Rob explains why the fascination with World War II, shares about his family life that contributed to the curiosity about the subject matter, and reveals the journey that went into crafting his first novel.

What motivated you to write Hunger Winter?

When my son was in eighth grade, he wrote a two-page story about World War II in the Netherlands. I thought it was interesting and suggested we could write a longer version of that story together for fun. The idea was that we would each write half of the chapters.

He agreed but soon became more interested in being a teenager than writing a story. By that time, I was hooked on the story and I decided to finish writing it.

Why did you choose World War II and the Dutch famine as your story focus? How much research did you have to do, and what surprised you the most?

I’ve loved learning about World War II since I can remember, thanks to my father, who was a World War II vet. My wife is of Dutch heritage, so it seemed a logical focus. As I got into the research, I learned about that awful part of the war the Dutch call the Hongerwinter.

When I discovered that many people don’t know about this part of the war, I knew I had to write about it. But I had to read more material that was specific to the Dutch experience, and I interviewed several survivors of the Hunger Winter.

I was surprised to learn how the Luftwaffe used kindness to get captives to reveal secrets. After the war, some of the American prisoners of war who had been interrogated reached out to their Luftwaffe captors because they had developed a friendship with them.

What did you learn about the Holocaust while writing Hunger Winter?

There were many brave people who helped the Jews, but there were also many Dutch citizens who turned them over to the Nazis.

Why did you choose to tell this WWII story specifically for kids to read?

There are three reasons. First, my son started the story one day in study hall and it was from a young person’s perspective.

Second, I love reading kids’ books. Many of my favorite books are kids’ books because the good ones are really good and they’re clean.

Third, I am passionate about getting more kids to read and I wanted to write a book that would grab kids’ attention and hold it.

After I finished writing the book, over a period of five years, agents and editors advised me to change the story. Their requests, which came one at a time, included requests to add 10,000 words, show more of the characters’ feelings, give more detailed descriptions, make it more unique, add chapters about Dirk’s older sister, and more.

Each time, it was a six-month process of changing the story to incorporate the good advice, and I hoped that this time it would be accepted. But it was always turned down or no response was given.

Finally, it reached a point that a trusted friend in the book business told me to move on to another book project and let this one go. Then late one afternoon I received an email from my agent saying we had an offer from Tyndale. It was a long road, but every person who pushed me to change the book made it better, and I am grateful for their suggestions.

Looking back, I see the purpose in the process. Soren Kierkegaard once said, “Life can only be understood backwards; but it must be lived forwards.” I wanted the book to be published five years ago, but God wanted more time to refine it and me. 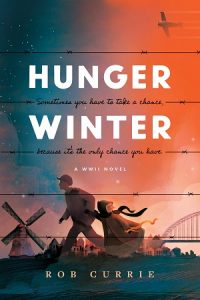