Why does Gomez Gomez have two last names for a name? 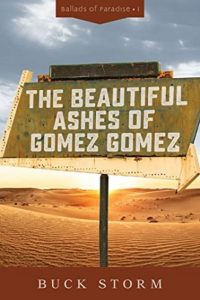 Mostly because it caught my ear when the title came to me. In the book, his dad named him after a notorious rodeo bull. But it fits because nothing about Gomez Gomez is completely normal. He’s definitely an adventure in humanity.

When I was a kid, my dad rodeoed a bit. Gomez’s character is inspired by a bull rider I met once back behind the chutes. He’d been gored not long before and had a fresh hole that went in low in his side and came out his back. I thought that was pretty dang cool.

Gomez Gomez—and the town—seem to have gotten themselves into a bad business deal. Without giving too much away, can you explain a little of what’s going on? Does it play into why Gomez Gomez is so fatalistic?

Sure. It’s essentially a quirky David and Goliath match up, pitting eccentric, homeless widower against a wealthy and influential businessman. Gomez Gomez has lost his wife, Angel, in a head on collision and, grieving, he’s moved into the bushes next to the crash site to basically drink himself to death.

It’s sacred ground to him. He’s always been a little (or a lot) out there, and alcohol certainly doesn’t help the situation.

Sonny Harmon, who owns the car dealership next door to Gomez Gomez’s vacant lot wants the land to expand. He basically doesn’t even consider Gomez Gomez human. The town squares up and takes sides. Hopefully, so does the reader.

What was the most challenging part of writing this story? 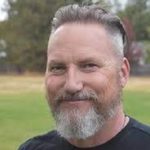 Probably putting a Catholic Priest in the middle of a love triangle. I really didn’t plan that, but there it was.

Obviously, by nature, it was a touchy subject to write about. I’m not Catholic, for one thing. So, I guess that makes me either the exactly wrong or exactly right person to write a novel about a priest struggling with his calling.

I did talk with Catholic friends. A situation like Jake’s isn’t an uncommon occurrence. I wound up doing quite a bit of research. Learned a lot. It was fascinating, really.

I think we often consider clergy, especially ones who live a conspicuously set-apart life, as existing on another plane than the rest of us mortals. It’s ingrained in us even as kids.

Of course, we know they’re really only human, but we still find ourselves taking that reverent step back. But what are their thoughts? Their dreams? Favorite songs? What did they dress up for on Halloween when they were kids? Who were their heroes? And, in this case, what if a priest falls in big, fat, messy, miserable love?

In the end, I had to just follow the story.