Beth K. Vogt is a nonfiction author and editor who said she’d never write fiction. She’s the wife of an Air Force family physician (now in private practice) who said she’d never marry a doctor—or anyone in the military. She’s a mom of four who said she’d never have kids. Now Beth believes God’s best often waits behind doors marked Never. Beth is a 2016 Christy Award winner, a 2016 ACFW Carol Award winner, and a 2015 RITA Award finalist. Her 2014 novel, Somebody Like You, was one of Publishers Weekly’s Best Books of 2014. The Best We’ve Been is the final book in Beth’s Thatcher Sisters Series with Tyndale House Publishers.

What inspired you to write The Best We’ve Been, book three in the Thatcher Sisters Series?
I’ve been thinking about writing Johanna’s story from the very beginning of this series, back when I knew her story wouldn’t be fleshed out until book three. I also knew that readers weren’t going to like Johanna based on how I introduced her at first—who she was, how she treated her sisters, Jillian and Payton. But Johanna had reasons why she acted the way she did, and The Best We’ve Been is when Johanna comes center stage so that we can begin to truly understand who she is.

What real-life themes do you bring out in this third and final book in the series?
We all face choices in our lives. Some choices are simple. And some . . . some are so, so complicated because they not only affect us but they also affect people we care about. I also examine how life can fall apart so quickly, along with our facade of control. The unexpected events that change us in ways we never imagine. And then there’s a theme of second chances—are they possible? Is it always wise to give someone a second chance?

How do you expect the novel to resonate with your audience? What are you most excited for your readers to experience through reading this story?
One friend who read The Best We’ve Been told me that she’d experienced something Johanna goes through in the book—and that what I wrote brought it back for her, that it was emotional for her. I write about real life and I want my readers to be drawn into that—to struggle with the questions my characters are asking, the choices they are faced with. I also wove some of my life experience in the book, too, because authors write what we know, which for me means I sometimes write what I’ve lived. There’s humor in this book and there’s heartache—and I want my readers to embrace both.

What is the role of faith in this story?
Some of the spiritual truths in The Best We’ve Been are pulled from my own experiences as a new believer. And it was fun to remember that time in my life, to share those memories with my editors as I talked about what I wanted to weave into the story and why. And some of what I wove into the story—the struggle? The questions we ask God? I’ve experienced that, too.

You’ve often referred to this series as “Little Women gone wrong.” Explain how your story incorporates themes that are similar to those of Alcott’s classic novel.
Little Women is a classic story that idealizes the relationships between four sisters. Just in the last few months we’ve seen yet another movie adaption of Louisa May Alcott’s novel, which was my favorite book growing up. For all their differences, the March girls are undergirded by a sense of loving unity and, well, goodness. The Thatcher sisters? Throughout this series of novels, I weave in the kind of reality you see in the popular TV show This Is Us. The Thatcher sisters struggle to find common ground, and their differences separate them, as well as secrets and the choices they make. The question is always: will they be able to overcome their differences and love one another, choose to be there for each other?

What truths do you hope readers will take away from The Best We’ve Been and the series as a whole?
I’ve always told my children that family is a mandatory formation up to a point—and then they have to choose to have a relationship with one another. This is played out within the Thatcher family. They are sisters, but at the beginning of the series, they don’t have a relationship with one another. In The Best We’ve Been, I hope readers see that “the best” doesn’t always mean you get what you hoped and prayed for—but what you have can still be good.

Which of the Thatcher sisters was the most challenging to write, and why?
Johanna was the most challenging to write because readers didn’t like her at first, and I understand why. I intentionally wrote her as an unlikable character. But I had to weave enough into book one, Things I Never Told, and book two, Moments We Forget, so that readers would go with me to book three, The Best We’ve Been, and hear Johanna out, so to speak.

How do you hope reading Johanna’s story will encourage readers?
One of my friends read book one, Things I Never Told You, and said she understood Johanna—that she knew there were reasons why she said and did the things she did. She offered Johanna, an imaginary character, understanding. I’m hoping as readers delve deeper into The Best We’ve Been, they’ll see that there’s always more to people than we realize.

What is it about Johanna’s story that women will relate to?
Women will relate to how Johanna walked away from a dream. How her heart was broken by someone she loved. How she’s been misunderstood. How her life has taken a very unexpected turn—and she can’t admit that she’s scared.

How do you hope that this book brings healing and refreshment to complicated family relationships?
I always write books about messy relationships because, well, I understand them. I’ve lived them. And I don’t always tie things up with a nice, neat bow at the end in my books—but there’s always hope. Always the truth that God offers us more than just the mess we might see right now. We don’t have to pretend to have all the answers.

What is one thing you learned about yourself through writing this book?
As I’ve written this series, I’ve been reminded again and again that life doesn’t have to be perfect to be good.

How does it feel to be wrapping up the Thatcher Sisters Series? Could you tell us about some of your upcoming projects?
I’ve loved writing this series. I’m so thankful I had the opportunity to tell these stories. I’ve been mulling over another women’s fiction project and the underlying theme is going to be pulled from my life. Personal. Challenging. 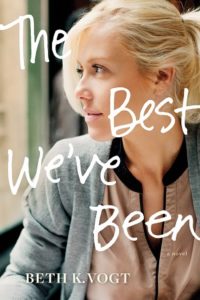