James R. Hannibal is no stranger to secrets and adventure. As a former tactical deception officer and stealth pilot, he has been shot at, locked up with surface-to-air missiles, and chased down a winding German road by an armed terrorist. He now uses his knowledge and skills to create stories full of mystery and danger.

In Chasing the White Lion (Revell), hitting shelves March 2020, Hannibal takes readers deep undercover into a criminal underworld where everyone has an angle and no one escapes unscathed:

CIA operative Talia Inger has reconciled with the man who assassinated her father, but that doesn’t mean she wants him hovering over her every move and unearthing the painful past she’s trying to put behind her. However, she will need his help as she strives to infiltrate the Jungle, the first ever crowdsourced crime syndicate, to rescue a group of kidnapped refugee children.

As Talia and her elite team of thieves con their way into the heart of the Jungle, inching ever closer to the syndicate boss, the White Lion, she’ll run right up against the ragged edge of her family’s dark past. In this game of cat and mouse, it’s win . . . or die. And in times like that, it’s always good to have someone watching your back. 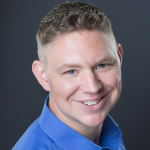 “In thriller writing, a classified past is both a blessing and a curse. I’ve had amazing experiences I’m never allowed to speak of in public, and those hidden experiences meant my first three novels had to pass through multiple program security offices before publishers could ever see them. However, even though I can’t talk about my real experiences, I can draw from them as I write, giving me an edge. Research is a little easier too. Any writer can find the information I put into my stories, but it will be a difficult hunt. I have the unfair advantage of knowing which rocks to overturn.”

James R. Hannibal is a two-time Silver Falchion Award winner for his Section 13 mysteries for kids and a Thriller Award nominee for his Nick Baron covert ops series for adults. The author of The Gryphon Heist, James is a rare multisense synesthete, meaning all of his senses intersect. He sees and feels sounds and smells, and hears flashes of light. If he tells you the chocolate cake you offered smells blue and sticky, take it as a compliment. 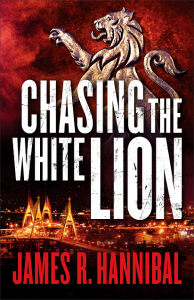 Chasing the White Lion
James R. Hannibal
Revell
Pre-order if from our store!