The author and former theology professor compares and contracts what early Christians believed with what many in the church believe today.

A former professor of theology at the Moody Bible Institute, Bryan Litfin is the author of several works of fiction and nonfiction, including Early Christian Martyr Stories and Getting to Know the Church Fathers.

His latest novel, the historical epic The Conqueror (Revell), kicks off the Constantine’s Empire series. Set three hundred years after the dates of Christ and the Apostles, Bryan’s novels flesh out how the early Christians dealt with the shifting world around them.

Brian, tell us a little about your new historical novel The Conqueror. 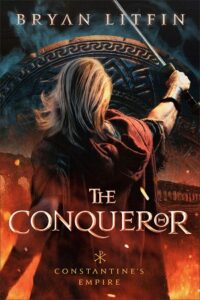 The plot takes place in the Roman Empire during the ancient church period, though not in New Testament times. Almost three hundred years after Christ and the apostles, the Emperor Constantine is a frontier general contemplating conversion to Christianity. But his great enemy Maxentius is entrenched in Rome, and battle looms.

Constantine sends the hero of this novel ahead of him to spy on Rome. Rex is a young, powerful Germanic warrior who has joined the Roman army as a special forces operative. But upon arriving in Rome, he meets someone intriguing: a beautiful Christian girl named Flavia, a senator’s daughter.

Together they work to bring down the wicked and decadent Maxentius, facing dangers and trials side by side. It all comes to a climax at the famous Battle of the Milvian Bridge in AD 312. The winner will determine the future of the empire. Will Constantine conquer by the sign of the cross and emerge victorious? Or will the ancient gods of Maxentius continue to hold the people in bondage to pagan religion?

You have a degree in journalism, a Master’s in Historical Theology, and a Ph.D in Ancient Church History. What is it about the ancient world—and church history specifically—that draws you to make it your life’s work?

My journey didn’t start with much of an appreciation of the ancients. I remember a high school Bible teacher of mine trying to teach me about St. Augustine, and I found it boring and irrelevant.

At that time, I was too immature to understand the value of history. Even during college, I didn’t pay it much mind.

It was only when I got to seminary that I began to appreciate my ancient forefathers and foremothers in the faith. I began to feel that my Christian faith had to be bigger and grander than just the little “box” of Christianity that I had known so far. Church history was full of characters whom I didn’t know—some heroes, some villains, and some that skirted the line between the two.

I also realized that my biblical interpretation would be very limited without any historical wisdom to guide me. In seminary, I thought that if I learned Greek and Hebrew, I would have the magic key to unlock the Bible.

But all it did was give me the ability to find even MORE interpretations! What wisdom could “lead me into all truth”? The Paraclete, of course. But does the Holy Spirit work in an individualistic way? Or does He whisper truth into the ears of all believers—not just in 2020, but in all centuries? Who am I to think that my views and my interpretations are obviously the best, or that I don’t need any words of advice from those who ran the race before me?

The truth is, we have a great cloud of witnesses—not just the Old Testament heroes in Hebrews 11, but now also from church history, too! I have made it my life’s work to introduce my fellow believers to our ancient church ancestors—through classroom teaching, through non-fiction books, and now also through historical fiction. Soli Deo Gloria!

This story takes place in the realm of ancient Christianity. How did your expertise in this area help you write the book? What kind of research was required?

I am deeply acquainted with the literature, archaeology, and outlook of the people of the ancient church. Most novelists have to look up things about their historical period and include them in the story.

But it didn’t quite happen like that for me. This material has been my scholarly field of expertise for twenty-five years. I’ve been reading, writing, and making presentations on this stuff for a long time.

I have a doctorate in it. I have also traveled extensively to Italy and throughout the Mediterranean and former imperial lands.

So, when I wrote The Conqueror, I didn’t just pull from book knowledge but from a deep reservoir of familiarity with the ancient church. I think that injects a lot of realism into the story.

These are not evangelical Christians wearing togas and sporting green leaves in their hair. They think and act like the ancient Christians actually did. Some of that might be surprising to modern Christians.