Historical romance author Amanda Barratt is the ECPA best-selling author of over a dozen novels and novellas including My Dearest Dietrich: A Novel of Dietrich Bonhoeffer’s Lost Love. Her latest novel, The White Rose Resists (Kregel Publications), again takes place during WWII, and depicts the students who defied the Third Reich and risked their lives doing so. In our exclusive interview, the author explains why she wanted to tell this story, reveals her goals in writing it, and shares what she hopes readers will take away on reading the novel.

Your novel is about the students who defied Hitler during WWII. What was it about their story that inspired you to share it?

The White Rose resistance group was formed by a handful of students who attended the University of Munich at the height of WWII. These students wrote and distributed thousands of leaflets exposing the atrocities of Hitler’s Reich and urging the German people to resist.

Twenty-one-year-old Sophie Scholl was the only woman who was part of the inner circle of the White Rose and the only woman to face execution for her involvement in the group. When I first heard Sophie’s story, this brilliant, courageous woman who risked, and in the end sacrificed, her life for the sake of her convictions caught hold of my heart.

The more I researched and explored, the more compelled I became to bring the stories of these extraordinary men and women to life through the pages of historical fiction.

What were your goals in writing the book?

Though the members of the White Rose are well-known in Germany, they are largely forgotten in America. I wrote The White Rose Resists to honor their legacy and illuminate their lives for readers who may be discovering them for the first time.

I believe stories like that of the White Rose have great power to speak into our lives today. These men and women stepped from the ranks of the silently complicit to raise their voices against injustice. It’s my hope and prayer that the memory of the White Rose will continue to spur on others to do the same.

What was the most challenging part in writing The White Rose Resists?

The White Rose Resists was a deeply emotional story to bring to the page. I journeyed alongside the characters as they faced heartbreaking consequences for their resistance and the impossible choices of war, shedding more tears throughout the writing process than any other novel to date.

Staying true to the historical narrative required me to take my characters to very dark places. To write those scenes, I had to walk through the darkness beside them. Though it wasn’t an easy novel to write, I’m humbled and thankful for the gift of sharing the story of the White Rose with readers.

Where do you draw the line between presenting historical facts accurately, but also keeping the story compelling?

My novel focuses on the point of view of Sophie Scholl, as well as that of two fictional characters who are composites of real individuals. There were many fascinating “rabbit trails” I would have loved to wander down, but had I done so, the novel would have become several volumes!

To do so, I extensively studied their letters and diaries, read memoirs, listened to interviews with family and friends, and accessed their interrogation transcripts and trial records. This research gave me a solid foundation upon which to fill in the inevitable gaps and omissions in the historical record with my fictional pen.

What would you like your readers to take away after reading The White Rose Resists?

At a time when “taking sides” against the Reich meant facing severe consequences, the White Rose boldly spoke truth, exposing the lies of the Nazi government, vocalizing the murder of the Jews, and proclaiming the responsibility of every citizen to act in opposition to the regime. “We will not be silent,” their fourth leaflet declared, “We are your guilty conscience. The White Rose will not leave you in peace.”

The White Rose was founded by individuals motivated by a deep faith in God and the conviction that they were called to act in opposition to evil. As I wrote the novel, I asked myself, “What would I have done in the time and place?”

This led to a second question, “What am I doing today?” Searching my own heart and realizing how often I choose complacency and how easy it is to remain a silent witness of injustice, challenged me on a personal level. I pray readers are inspired to look within themselves and ask hard questions, then look at the world around them and take action. 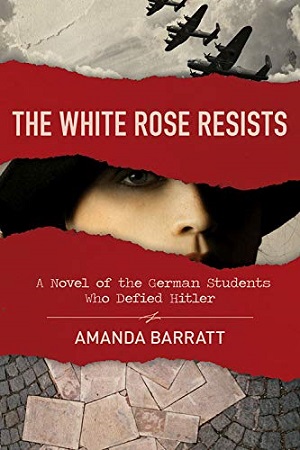 The White Rose Resists: A Novel of the German Students Who Defied Hitler
Amanda Barratt
Kregel Publications
Buy the book from our store!