The author of more than a dozen novels, historical author Jody Hedlund has won the 2014 Carol Award, the 2016 Christy Award, and the 2016 Christian Book Award. Her acclaimed historical Orphan Train series rolls on with Together Forever (Bethany House), giving a riveting glimpse into the life of a placing agent delivering orphans to new homes. In this interview, Jody shares more about the historical background of the series, how close her fiction is to the reality, and how readers can rely on the strength of God…

What can you tell us about the Orphan Train series? 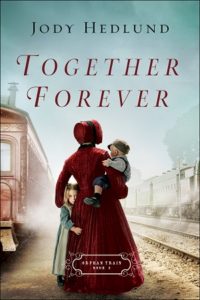 I have long been fascinated by the era of the Orphan Trains and the heart-wrenching stories of the homeless and helpless young orphans that were taken from the streets of New York City and other eastern cities and shipped west by the dozens. I was familiar with stories of those scared orphans who were placed out in what was thought to be a more wholesome, healthy environment of the newly settled Mid-Western states. Some of the orphans found happy endings and were adopted into loving families. Others experienced great abuse and heartache in their new homes.

While stories of the orphans who rode the trains have been told—and rightly so—the stories of the women who were involved in the movement are not as well known. One of the things I particularly like to do when telling my stories, is focus on women who have been overlooked by the pages of history. I consider it a great privilege to be able to bring forgotten women to life for our modern generation. Thus, throughout this series, I’ll be focusing each book on a different aspect of the Orphan Train movement, particularly from the perspective of women who experienced riding the trains in one form or another.

What does it take to research the period where and when Together Forever takes place?

In the beginning phases of writing this series, I did a great deal of reading about the orphan train movement. I really loved Stephen O’Conor’s book Orphan Trains, because he includes so many personal stories and details about real orphans, which are heart wrenching.

I also read A History of New York City to 1898, by Burrows and Wallace, which gave me great insights into the lives of immigrants, particularly immigrant women. Masses of foreigners were arriving into New York City daily, and the book gave a detailed look into their pathetic housing situation, the difficult working conditions, as well as gang problems and the underworld.

Finally, another important aspect of the story that required a concentrated amount of research was the development of railroads. The mid-1800s was an incredible period of growth for the railroad industry in the Midwest. The new railroads aided the orphan train movement but also brought about the settlement of the Midwestern states, including Illinois, which is one of the settings of the book.

How does your faith influence how you approach writing stories?

While I try not to preach at my readers, I do weave faith themes through my books. My faith also motivates me to keep my stories “clean.” I believe Christian fiction is a much-needed alternative, especially Christian romance.

I got an email from a reader telling me she that she’d picked up several books and been really turned off by the explicitness within them, but that she didn’t realize the books contained such content until she started reading them. She wanted to know if there was a rating system or some way that she could tell if the book would be “clean” before she started reading. I was glad that I could point her to inspirational Christian fiction, that she would be guaranteed the sweet romance she desired.

Fact vs fiction—what (if any) liberties did you take with the historical facts to make the story in Together Forever work?

As always, I like to pull real stories from history and weave them into my books. While this series isn’t necessarily based real orphans in particular, I did gain inspiration from the many of the real-life orphan train experiences that are recorded. I use bits and pieces from various stories to shape my fictional characters.

I also did the same thing in shaping my heroine, using inspiration from a real placing agent. In researching the roles of Children’s Aid Society (CAS) placing agents, I came across one of the most well-known placing agents, Clara B. Comstock, who traveled west with children from 1911 to 1928. During her years working for CAS, she made seventy-four trips and wrote about her experiences.

I drew from her notes about what it was like before the trip, the clothes the orphans were given, to the detailed lists of supplies and food she packed. She also spoke of what it was like during the journey west along with what happened once they arrived at their destinations, including an incident where she was quarantined with a young 5-year-old boy who contracted diphtheria.

What do you hope readers get out of Together Forever?

I pray that in reading this story, not only will readers gain greater insights and a different perspective of the orphan train movement, but that they will also be encouraged to know God is present in their weakest moments.

We can rest assured it will always be just enough. His strength is made perfect in our weakness.