Susan Anne Mason’s historical novel Irish Meadows won the Fiction from the Heartland contest from the Mid-American Romance Authors chapter of RWA as well as the Christian Retailing’s Best Award for Debut Novel. Her latest novel is The Brightest of Dreams (Bethany House), the third book in her Canadian Crossings series. Quinten Aspinall crossed an ocean to reunite his family—but meeting Julia Holloway makes him question everything. Torn between reuniting his family and protecting Julia, will Quinn have to sacrifice his chance at happiness to finally keep his promise? In this interview, Susan tells us about the historical underpinnings of the story, gives us some background on her leading man and leading lady, and reveals how this standalone story interconnects with the other books in the series.

This story centers around the British Home Children who came to Canada in the early twentieth century. Can you tell us a little more about the subject? 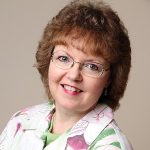 I’d be happy to. When this topic was suggested as a possible subject for a book, I confess I’d never heard of the British Home Children before. After doing some research, I was surprised to learn the role they’ve played in my country’s history. From the late 1860’s to about 1948, more than one hundred thousand children of all ages were sent from the United Kingdom to Canada to be used as indentured workers, mostly on Canadian farms.

The intention was that the orphans would have a better life in the wide, open spaces of Canada, working until the age of eighteen, at which time they would receive a decent amount of money to start them on their own path in life.

The sad reality is that many children were abused, both physically and emotionally. Often the children were not orphans at all, but victims of hard times, whose parent had placed them in the home temporarily, hoping that when their situation improved, they would reclaim their offspring.

However, by the time this occurred, the children had already been shipped off to Canada. This is the plight of Quinten Aspinall’s younger siblings in The Brightest of Dreams, and when Quinn comes back from the war, he is devastated to learn that his mother is in a workhouse and his three siblings have been sent to Canada. Thus begins his journey to find them and to ultimately reunite his family.

Tell us a little more about your hero in The Brightest of Dreams.

Quinten Aspinall is one of my favorite heroes. He’s protective, driven, honorable, and fiercely loyal, almost to a fault. When his father died, he made Quinn promise to provide for the family and to keep them all together. For nine years, Quinn tried his best to do so, working as a valet for an earl, sending every shilling home to his mother for his younger siblings.

When WWI breaks out and Quinn is sent off to war, he has no idea that his mother is in such dire straits or that she has surrendered the children to one of the Barnardo Homes. When he learns that Becky, Cecil and Harry have been sent to Canada as indentured workers, Quinn is devastated and vows to bring them home where they belong.

Of course, I had to add a little romance to the mix, so I added Julia Holloway, a young woman who has ‘run off’ with a Canadian soldier. Quinn is asked by her uncle to look for her while he’s overseas, promising that if he manages to bring her home, he’ll be in for a handsome reward.

Can you tell us a little more about Julia and her story?

Without giving away too much, Julia is in dire straits when Quinn finds her living in the slums of Toronto. She came to Canada to help a wounded soldier, but circumstances changed, and she is left with no money, nowhere to live, and no way to get back to England. She ends up living in the worst conditions with a less than scrupulous landlord and soon finds herself running out of options.

Thankfully, Quinn arrives just in the nick of time and though Julia hates to be indebted to Quinn, she can’t afford to refuse his help. Things just start to look up for her, when she receives some devastating news that will change her life forever. (Is this enough of tease to read the book?)

What other nuggets can you share with us (without spoilers)?

The Brightest of Dreams is the third book in the Canadian Crossing series, but it is most definitely a standalone book. I did this on purpose so that each of the three books could be read independently of the others. The protagonists of all three stories meet on the ship coming to Canada, each with their own reason for making the voyage. Their individual stories are told separately, but there are a few overlapping characters in all of the books, such as Mrs. Chamberlain, the boarding house owner and Reverend Burke, the local minister, a fun touch that adds a nice consistency to the series.

Mrs. Chamberlain and the minister have been friends for years, supporting each other through the deaths of their spouses. Quinn’s arrival at Mrs. Chamberlain’s doorstep brings back horrible memories from her childhood, and Rev. Burke helps Mrs. C. find the closure she never received back then. I didn’t plan on Mrs. Chamberlain having been a British Home child herself, but the story just evolved on its own and has a fitting tie-in with this last story in the series.

What is the overall theme of the book?

I think the main theme is learning to rely on God to get us through life’s hardships. Quinn tries too hard to fix all his family’s problems on his own and soon learns that he can’t control the actions of others, and that only through prayer and trusting in God’s plan for everyone, can he accept the outcome that occurs.

This story deals with some sober topics, such as physical abuse, but I felt the need to portray events as realistically as possible, without being graphic, in order to do justice to what the real British Home children went through.

I hope readers will love the twists and turns of Quinn and Julia’s story as much as I did! 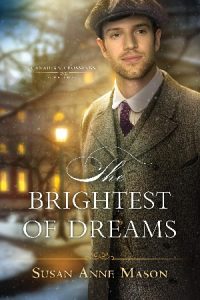 Buy The Brightest of Dreams in our store HERE!