A Wild West Show provides the exciting setting for a trio of adventurous ladies in the author’s newest series.

Tracie Peterson, writer of over 100 romance novels, kicks off her new Brookstone Brides series with When You Are Near (Bethany House). The series is set in the thrilling world of a Wild West show where trick riding and trick shooting are all the rage. In our interview, Tracie shares what inspired her to pick this fascinating backdrop, what helps her determine whether a book will be co-written, and what she loves most about writing historical romances. 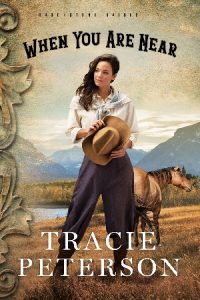 Tracie, When You Are Near is the first book in the new series Brookstone Brides. It seems to combine the thrills of a wild west show with romance and even a murder mystery. What inspired you to mix all these things together?

I love action, adventure and romance. Even as a child those were my favorite books. So when it comes to writing, I still enjoy the kind of story that doesn’t rely on any one element, but mingles several to give the reader a well-rounded story.

There are several characters introduced in the book. No spoilers, but what can you tell us about your main characters?

Lizzy Brookstone is the daughter of one of the two brothers who created the Brookstone Wild West Extravaganza—an all-female show. Her father and uncle had been members of a wild west show and taught Lizzy to trick ride.

The other two focal females in the series are Mary Reichert, a trick shooter and Ella Fleming another trick rider who also Roman rides. These three young women form a tight friendship in their work on the show, their spiritual walk, and their desire to figure out who murdered Mary’s beloved brother.

What about the Brookstone Wild West Extravaganza made it an ideal setting for a series?

Wild West shows had been quite popular in the late 1800s. Not only were they popular in America, but in Europe. Queen Victoria was a huge fan, as were others.

Putting the characters in a wild west show allowed for all sorts of benefits—changing the setting constantly if needed or letting them settle at the show’s headquarters in Montana. It also allowed for a variety of additional characters to complicate the storyline.

What kind of research did you do to get the details right? 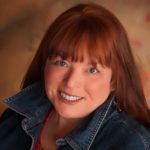 The very best kind—hands-on. I went to a ranch down in Colorado where trick riding is taught.

I also spoke with an expert on old firearms and got to handle a few weapons and see just how hard it would have been to strike some of those poses, much less accurately shoot. I also read a ton of books and watched a bunch of videos.

I also spent many hours discussing the various tricks and skills used in these kinds of shows, with performers who actually did these things.

Tracie explains what readers can expect from the new series: Click through to continue!