In Jocelyn Green’s latest novel, A Refuge Assured (Bethany House), America’s first years explode off the page—including founding father Alexander Hamilton. A lacemaker flees revolutionary France to America, while a veteran of the American Revolution is drawn into the escalating tension of the Whiskey Rebellion. The two are drawn together to fight for the peace and safety for which they long. In this interview, Jocelyn Green shares why she chose to write about people traumatized by different revolutions, her favorite part of writing historical novels, and what she hopes readers get out of the book… 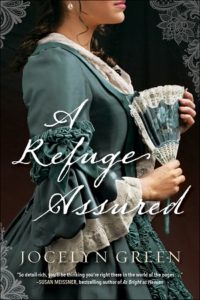 Jocelyn, your novel A Refuge Assured brings together Vivienne Rivard, a refugee from the French Revolution, and Liam Delaney, a disillusioned militiaman who fought in the American Revolution. What is it about these characters that made you want to tell their story?

I find both of their plights fascinating—Vivienne fleeing one revolution, and Liam struggling to find his place in the wake of another. They represent lesser-known perspectives and experiences from two highly celebrated revolutions. The ability to put these two characters together offered a great opportunity to explore not just the tension between a hero and heroine, but between liberty and order, as well.

What kind of research did you conduct to write about this historical period?

I devoured every book and digital resource I could find first, plus documentaries on the French Revolution, Marie-Antoinette specifically, and the Whiskey Rebellion. I did not go see Hamilton on Broadway, but I did read Ron Chernow’s amazing book about Alexander Hamilton since the Treasury Secretary plays a significant role in my novel.

I also took my family on a spring break/research trip out to Pennsylvania. My favorite research spot in Philadelphia was City Tavern, an eighteenth-century-style restaurant that was a frequent haunt of our founding fathers. I created a fictional tavern in Philadelphia for my characters, so eating at City Tavern and getting a tour into every corner was a special treat.

From Philadelphia, we drove to the site of French Azilum, or Asylum. As always, on site research is the most fun!

By bringing together these representatives from different revolutions, did you find yourself comparing the French Revolution and American Revolution—or are these just historical backgrounds for your characters?

Not only did I find myself comparing the two revolutions (just as contemporaries did), but I also detected echoes from our own political conversations today. These are really timeless ideologies, the struggle between personal freedoms and order, whether the end justifies the means, and how best to go about social and political change. 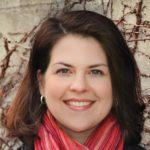 What is your favorite thing about writing historical romances?

Other than the research trips, right? There are many aspects I love about it.

One of them is finding two historical figures to bring to life and explore through the vehicle of story—such as a revolution-era lacemaker and a disillusioned militiaman. Showing these characters’ hopes, fears, dreams, loves, and struggles is a really captivating way to shed light on the humanity in our history.

What do you hope readers will take away after reading A Refuge Assured?

The primary theme is that of finding refuge in the Lord, when no physical place of safety seems to exist. But a secondary theme popped up through a character I didn’t plan on creating: Armand, the father from whom Vivienne had been estranged her entire life. The two flee France together, and through their relationship, a picture of reconciliation emerged.

At one point Armand says to Vivienne, “One is never too old for a father’s love.” None of us are ever too old –or “too far gone”—for our heavenly Father’s love, either. And that is the greatest reconciliation story of all time. That’s the real romance I hope readers carry away in their hearts once they turn the last page.