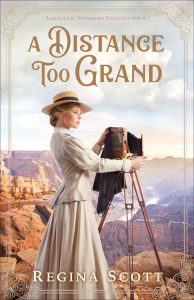 This year the Grand Canyon National Park celebrates its centennial anniversary. Award-winning author Regina Scott is honoring this momentous occasion with the release of A Distance to Grand (Revell), book one in the American Wonders Collection. In this captivating novel, Scott invites readers to experience both romance and intrigue in the majestic beauty of the Grand Canyon.

When her father dies, Meg Pero is determined to take over his profession. Her first task is to fulfill his last contract with the Army, which entails joining a survey crew exploring the North Rim of the Grand Canyon. Unfortunately, women photographers are rare and the head of the expedition is none other than the man she once refused to marry, Captain Ben Coleridge. Undeterred by this fact, Meg presses on to regain the life she loved and continue her father’s legacy.

Captain Ben Coleridge is eager to begin his new assignment, but there is much more at stake than surveying the land. He is following the route of his missing father in an attempt to find out what happened to him. As danger lurks from both nature and man, Meg and Ben must work together to accomplish their goals, safeguard the expedition, and fulfill the Army’s commission. Can they find a way to the end of the trail and to the love they thought they left behind?

In this interview, Regina tells us a bit about the book, explains why she chose the Grand Canyon as the setting, and reveals what she needed to research to get the historical details right…

Regina, would you provide a brief description of A Distance Too Grand?

A Distance Too Grand is a romantic adventure that pits a spunky lady photographer against the determined Army engineer who once courted her as they seek not only to survey the North Rim of the Grand Canyon but to uncover its secrets. Their work will test their resolve, their faith, and the love neither completely left behind.

Why did you choose the Grand Canyon as the setting for A Distance Too Grand?

Photographers were critical to the U.S. Army’s surveys of the West. Some of our best early pictures of Yosemite, Yellowstone, and other scenic wonders came from those commissioned photographers. I wanted to give Meg Pero, my heroine, something equally amazing to photograph. What better than the majesty of the Grand Canyon?

This is book one in the American Wonders Collection. Which other national parks will you be featuring in your novels?

Book two will be set in Yellowstone, book three in my own backyard—Mt. Rainier.

Meg faces some hardships as a photographer in the 1870s. Can you please expound on the type of struggles she encountered?

Although women were successfully leading their own photography studios in the bigger cities by the 1870s, few would have been accepted on an Army expedition. The rugged travel over lands with no roads, the chance that clean water might not be found or hunting would prove challenging, and the sometimes rough companionship of the trail meant women were generally considered unsuitable for the role of expedition photographer.

Then too, the profession itself was not without its difficulties. Cameras, particularly those for landscapes like the Grand Canyon, were massive and heavy. The chemicals used to develop the plates were toxic. All the more reason for us to be in awe of what early photographers like Timothy O’Sullivan created.

Who’s your favorite character in A Distance Too Grand?

Though I’m always close to my heroine and hero, one of my favorite characters is Dot Newcomb, the expedition cook. Dot has been working with her cartographer husband for years. She knows what the army expects and what she can manage with the supplies and rations she’s been given. And she isn’t afraid to speak her mind! Dot will be your best encourager, the one who has your back. Just don’t get between Dot and her cinnamon.

What type of research was required for writing your new novel? 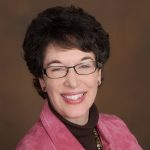 A wide variety! I studied what plants were historic to the North Rim and the slopes as you descend from it into the Canyon. I poured over maps to confirm camping sites, springs, and trails. I looked up details on the U.S. Army surveys—the procedures, equipment, and results—as well as who led them, what they wore, and how they lived on the survey.

And I had to find something for a lady to wear riding sidesaddle over difficult terrain at a time when bustles were the rage, but you were allowed only one small trunk for two months on the trail and little time to wash!

You’ve written more than 45 historical romances. What do you enjoy the most about writing historical novels?

As you could probably tell from my last answer, I love the research! Discovering our past opens my mind to so many ideas. People haven’t changed much over the hundreds of years I generally write about. But the world and their place in it has. Like the Grand Canyon, we need to preserve these precious details.

What do you hope readers gain from reading A Distance Too Grand?

I hope they are swept away to another time, another place, that they marvel like Meg and Ben over the grandeurs of creation, and that they root for Meg and Ben to learn the truth about his father and their love.

A Distance Too Grand
American Wonders Collection #1
Regina Scott
Revell
Buy the book from our store!