Haunting and hypnotic, The Day the Angels Fell (Revell) explores the difficult questions of life in a voice that is fresh, friendly, and unafraid. With this powerful novel, Shawn Smucker has carved out a spot for himself in the tradition of authors Madeleine L’Engle and Lois Lowry. 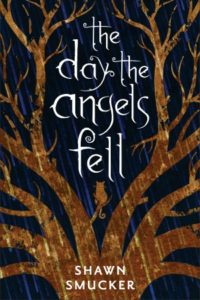 Where did you get your inspiration to write The Day the Angels Fell?

I was co-writing a memoir with a man in Istanbul, Turkey, who was dying of cancer. The goal was to finish the first draft before he passed away, so it was an intense three weeks, and we spent a lot of time together. For the first time in my life, I was face-to-face with mortality—he was forty-nine years old, a husband, a father of two children—and I wondered how I would feel if that was me, preparing to die.

When I got home from the trip I started talking to my children about what kind of story they would like, and together we came up with the basic structure for The Day the Angels Fell. As I began to write the book, I realized that doing so was my way of working through this fear of death I had taken on. And writing it really helped me come to grips with my own mortality.

Which character is your favorite and why?

My favorite character is Abra. She’s a strong, determined girl, fiercely loyal, courageous in the face of death. In other words, she’s who I would like to be. I also like the old Samuel Chambers because I have a feeling he’s very much how I will be when I’m an old man—a little grumpy, a little bit of a hermit, but mostly a soft, sentimental type.

How did you choose the setting for your novel?

The setting is the farm where I lived for five years, really the earliest place I can remember. It’s always had mythic attributes to it, at least in my mind—there was the farm with its shadows and huge barns and open spaces; there was the church across the street and the creek behind it; there was the cemetery and the road that went off into the country. This setting has always meant so much to me.

Would you classify your book more as a mystery or as a fantasy?

I don’t think of it as a fantasy, although there are certainly fantastical elements. What I wanted to do was write a story that an old man looking back on fifty or sixty years later might find hard to believe, which is what’s happening here. I guess I’d say more mystery, although not in the classic whodunit sense. The mystery is Samuel and Abra trying to find out more about the mystery of death, which is, I think, a mystery we are all very concerned about.

Who is the primary audience for The Day the Angels Fell?

The primary audience would be people who enjoy whimsical tales about childhood that are a bit melancholy, a bit nostalgic. Also, people who would like to explore the idea of death being a part of life.

In what way would you say your faith is worked into the book?

My personal faith is strongly rooted in hope. I think what this book really is, at its core, is me trying to find hope even in the darkest edges of life.

Is there some lesson you hope readers will take away from reading your book?

I’d like young readers, any reader, to think more about their own death, to think about why it’s scary for many of us. Our culture does everything it can to keep death at arm’s length, especially with children. I’d like us collectively to consider what death actually is, what it might lead to, what its greater purpose could be.