Melissa Ferguson enjoys writing romantic comedies full of humor and heart. She has set her second novel The Cul-de-Sac War (Thomas Nelson) in Abingdon, Virginia. In our exclusive interview, Melissa tells us about her protagonists, Bree and Chip, what inspired her to tell their story, and what themes she was exploring through this romance.

Tell us about Bree Leake and Chip McBride.

33-year-old confident, free-spirited Bree Leake has just moved from Gatlinburg, Tennessee (where she had many merry adventures with her best friend who was the protagonist of my first novel, The Dating Charade) to the small, Hallmark-worthy town of Abingdon, Virginia to try her hand on stage. And, as it turns out, she’s pathetic.

As vital in the plays she’s acting in at The Barter as the potted plant she lounges beside most of the time on stage. But while on the exterior she seems the picture of energetic happiness as she bounces from job to job, lifestyle to lifestyle, she’s starting to wonder if there’s something wrong with her.

Why does she find herself constantly discontent with one job and jumping to the next? Why isn’t she happy to settle in even just one area of her life—whether a relationship, house, or job? Is she incapable of being happy? These are the thoughts running through her mind when her neighbor moves next door: Chip McBride.

These days Chip McBride has one goal. While he’s working feverishly to part ways with his father and brothers’ construction company, get his own construction company off the ground, and prove himself as the successful businessman he knows he can be, he can’t help finding himself constantly distracted and charmed by his new neighbor.

More specifically, he can’t help laughing at how irritated she always is at something he (always unintentionally . . . of course), does. But when his formerly amusing neighbor begins to wreak havoc on his life after she determines to push him out, he’s up to the challenge. Chip is just as free-spirited, just as competitive, and just as stubborn as she is, and before long, a cul-de-sac war ensues.

What inspired you to tell their story?

My first inspiration came when my friend was telling me one day a hilarious story about a neighbor war that was going on with his neighbor over invisible fences and trashcans. I found myself thinking, You know, there are so many people in the world who find themselves stuck with bad neighbors. Wouldn’t it be funny to pair up two people who are so equally stubborn and competitive that they actually do wild things to each other instead of just thinking it? Wouldn’t it be funny to watch two neighbors who just love to hate each other and the way it all escalates and unfolds?

My second inspiration from the story came from the setting. I live in the area where this book is set: Abingdon, VA. One of my favorite activities around here is to go to The Barter Theatre, the nation’s oldest live performance theater, for a play or musical.

One day while I was with my daughter watching Singin’ in the Rain, I thought, “Wouldn’t it be so fun to write a book not only about this absolutely adorable Hallmark town, but to make it also be about a girl who is a terrible actress and only has a few short weeks to learn how to tap dance for an audition, or somehow, loses an opportunity to have something she really loves?”

And thus began the start of the story!

What themes were you especially wanting to explore through The Cul-de-Sac War?

Contentment. I actually included this quote from CS Lewis in a key scene in the book, “If I find in myself a desire which no experience in this world can satisfy, the most probable explanation is that I was made for another world.”

I wanted to explore this feeling I have a lot, which is that no matter how wonderful any particular moment, I still always sense a hole, a tiny tear in the experience that keeps me from feeling pure contentment. Why? There are numerous reasons, I think.

To name a few, I’m always aware that time keeps moving forward, the happiness of this moment will soon become a memory, there are others suffering in this very moment and that’s heartbreaking, I myself may suffer in the future and that’s unsettling. In essence, I’m still living on Earth. Earth is terribly broken. This home is only temporary, and God has created us that we all long in our souls for something eternal.

Finding a way to appreciate the level of contentment this Earth can provide while looking forward to the world God wants for us is something Bree is especially aware of in the story and has to work through, just as I did as I wrote.

Did any of the characters surprise you as you told their story?

Probably Evie. I think of all the characters, I enjoyed writing about Bree’s quirky housemate the most. Evie is the costume designer for The Barter and has a love/hate frenemy-ship with Bree. Because Bree’s grandmother left the house to both Evie (her former live-in caretaker) and Bree, they both are stuck living together until they figure out what to do with the situation.

And, oh-so-conveniently, Evie (spurred by Bree’s nemesis neighbor, Chip), decides to take up the ultra-hippie, minimalist lifestyle, and starts hauling off furniture and shutting off water and all these things that humorously make Bree’s life miserable. I loved writing about quirky, cranky, oddly-lovable Evie, and I loved how we glimpse her insecurities and need for human friendship and how the bond between Bree and Evie forms.

What would you like readers to take away after reading The Cul-de-Sac War?

I hope readers come away from The Cul-de-Sac War with a smile on their faces, having laughed and enjoyed a little mental break from the world and all its fires, and I especially hope people walk away grateful for the sense of hope God gives us about the world to come. 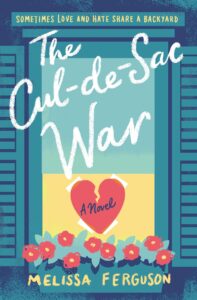 The Cul-de-Sac War
Melissa Ferguson
Thomas Nelson
Buy the book from our store!