Melissa Ferguson used to have hobbies like running and backpacking—but now that she and her husband are outnumbered, her hobbies include diaper changes and chasing toddlers in parking lots.

Her debut novel is the rom-com The Dating Charade (Thomas Nelson), a hilarious and warmhearted reminder that love can come in very small packages—and that sometimes our best-laid plans aren’t nearly as rewarding and fun as the surprises that come our way.

In this interview, Melissa explains why she wanted to write about the discomforts of dating, how her faith impacts her storytelling, and how a busy mom finds time to write.

In real life you’re a married-and-relatively-new-mom raising three small children(!).  What inspired you to write this story featuring the discomforts of dating?

Being an author, I believe, is all about following those rabbit trail daydreams and seeing what wild adventures ensue. For me, The Dating Charade started precisely because of my life as a mom of three children.

With two-year-old twins and a newborn at the time, I found myself wondering (in the midst of being covered in screaming kiddos and flying food) one day how humorous it would be for a confident, independent guy to end up suddenly with my life without warning (hence, poor Jett) and how he would handle all the chaotic, hilarious parenting moment that happened each and every day.

Your character, Cassie Everson, is “an expert at escaping bad first dates.” Is this storyline at all based on any of your own experiences?

Ha, not really. My husband is the only man I have ever truly dated (which is its own love story in itself) and once he caught me, I never really wanted to escape. J

However, I have a load of hilarious stories from friends who have done online dating and had horrible dates! One friend was in the midst of sharing about her latest experience when the idea for writing about it began.

Jett knows Cassie from high school but wasn’t her high school sweetheart. Did Cassie and Jett’s previous acquaintance make it easier to have their story interweave? Was anything surprising as you wrote their story?

Oh, there’s always plenty of surprising tidbits your characters make known to you while you are writing. I had no intention of writing The Dating Charade with Jett having a high school crush on Cassie from afar. But as I wrote, the words presented themselves, and I followed the story.

I’m not sure if it made it easier for their story to interweave, but I do think it was endearing to imagine him liking her—for her strengths, not just her beauty—from a distance, years prior. It also justified why he would continue to pursue her even after a first terrible meeting. She was the Cassie Everson. He wouldn’t just let her go after one awkward night.

Aside from that, there were plenty of surprising points in the story. The whole story was surprising to me! I think one surprising thing I loved and chuckled to myself over many a time was Edie and her hand sanitizer and relationship with men and attitude. I love Donna Gene and Edie.

How does your faith impact your storytelling?

With every story I find I start with a message and work my way out from there. And with every message the root comes from Christ and the message of Scripture.

In this story, I started with the message of fostering and the power of adoption and God’s heart for the broken and lonely, and His grand message of taking us beneath His wing—and commanding us over and over to care likewise for those in need. Every book I’ve written so far starts with a God-breathed message and works itself out.

With twin toddlers and an infant of your own, how do you make the time to write?

Ah, time. Well, let’s start by saying I love caffeine. I tried to go without caffeine for a couple days last month and slept 13 hours both days.

I realized in those moments that I could either go without caffeine and have a nice, healthy sleep schedule, or I could drink caffeine and parent my children and write. So, caffeine it is. (I say while raising my coffee cup in the air as a toast)

Second, I write during rest times for my children and after hours when my husband is home.

Third, meals become pretty basic when writing under deadline. Like, “Here are carrots and hummus and apple slices with bread” dinners three nights a week. 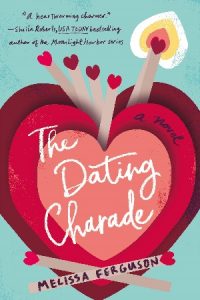 The Dating Charade
Melissa Ferguson
Thomas Nelson
Buy the book from our store!