Tamera Alexander’s historical romances have been awarded and nominated for numerous industry-leading honors, including the Christy Award, the RITA Award, the Carol Award, and Library Journal’s top distinction, among others. She kicks off her new Carnton series with the novel With This Pledge (Thomas Nelson): What can a woman—a mere governess—do against the scourge of slavery? In this interview, the author shares the overall theme of the series, what inspired her to set a series at the real-life Carnton Plantation, and what readers can expect from future books…

Tamera, your new Carnton series features Southern romance and real Civil War history set at Franklin, Tennessee’s beloved Carnton Plantation. What inspired you to set a series in this time and place? 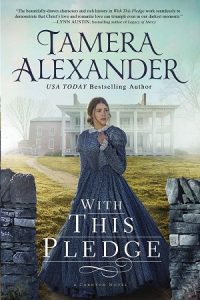 When I first heard about the Confederate sharpshooter and governess who met and fell in love during the aftermath of the Battle of Franklin at Carnton on November 30, 1864, I knew I wanted to breathe life into that piece of history. I’m a sucker for a real love story!

What can you tell us about the arc or theme of the series?

The Carnton Novels series begins with Christmas at Carnton, a novella I really enjoyed writing. As with all my Southern mansion novels, that story is rooted in real history. Specifically, that of Women’s Aid Societies during the Civil War and how women had their own battle to fight on the home front.

The four books in this series all explore the indomitable strength of the human spirit in the face of extreme adversity, and of lasting hope that can be found only in Christ.

You’ve woven in historical details into With This Pledge. What kind of research did you do? How deeply entrenched into the narrative are these real accounts?

I love to research—and researching With This Pledge was especially gratifying. But I often wonder how Captain Roland Jones and Lizzie Clouston would feel knowing that their lives and love letters are the inspiration for a 21st century novel.

In researching and writing Roland and Lizzie’s love story, I had the extreme pleasure of connecting with Captain Jones’ great-great-great grandson, David. Quite a thrill for this history-loving author!

David shared the love letters between Roland and Lizzie with me, along with the family history—as did the wonderful folks at Carnton. This rich wealth of resources and intimate insights have made the writing journey for With This Pledge a wonderful one.

But it wasn’t without its challenges. Weaving real history with fiction can be tricky. Add to that a cast of characters which is largely based on real people—and the challenges multiply!

Regarding the depth of truth in the story, the details of the Battle of Franklin are painstakingly accurate. With few exceptions, every letter or military communique in the book is also true to history.

I provide a lengthy author’s note in the back matter detailing these facts. I also have a “Truth or Fiction” page—located on With This Pledge’s book page—that provides yet more information on the real history surrounding Carnton, Roland, Lizzie, all the other “real” characters in the book, and of course, the Battle of Franklin.

What about Lizzie Clouston made you want to build a story around her? 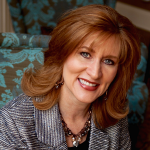 Once I learned the truth about what happened within the walls of Carnton that night of the battle and during subsequent weeks and months following, I was inspired to learn about the soldiers who fought in the battle, both those wounded and killed.

But I was also driven to learn more about the women in the house that night. Lizzie Clouston, Carrie McGavock, and the McGavock’s elderly cook—who is named Tempy in the book. What would those women have experienced? How would they have helped to care for so many wounded?

What does it feel like to see two opposing armies, each 20,000 strong, preparing to do battle in your own backyard, so to speak. And when the Federals unleashed that first avalanche of cannon and rifle fire, and the regiments of Confederate soldiers kept pushing forward…

What was it like, only moments later, to see your home fill to overflowing with 300+ bleeding, wounded and dying men, not counting those soldiers who filled the yards and outbuildings.

With nearly 10,000 men wounded or killed in that five-hour battle, the Battle of Franklin is said to be the bloodiest battle of the Civil War. To be sure, the lives of everyone who lived through that horrific experience were never the same.

What can readers expect from future books in the series?

I’m writing the second full length novel in The Carnton Novels series right now. It’s about the formation of the McGavock cemetery, the largest privately-owned Civil War cemetery in the nation.

It’s fascinating history, which is only made more so by the real “Book of the Dead” at Carnton that records the near 2000 names of the hastily-buried bodies of men who were killed in the battle and who were exhumed and reburied in 1866.

I’m still researching the history of Carnton and Nashville for the third book. But the story promises to mirror the themes of restoration and reconstruction that are reflected in that particular era of our country’s history. And, of course, there will be a love story!