Nashville, TN (October 24, 2020)
From New York Times bestselling author Shelley Shepard Gray comes a new series that follows a bookmobile driver-turned-matchmaker who learns that her Amish patrons need a whole lot more than just new books to read. The new Berlin Bookmobile Series, kicks off with the first book, A Perfect Amish Romance, which is set to release January 19, 2021.

Book Synopsis:
Aaron Coblentz has a secret: he’s been studying to take the GED to get promoted at work. But he can’t let his Amish family know, not when his older brother already left the faith just a year after getting baptized, practically crippling the family. When Aaron asks bookmobile librarian Sarah Anne Miller for some additional study guides, she does one better. She arranges for Kayla Kaufman to be his tutor.

Kayla has a secret, too. Her life has been turned upside down in a matter of months—her mother’s death propelled her father into a constant state of depression, and unable to deal with his erratic behavior, her longtime boyfriend has broken things off. But despite losing those she holds most dear, she hasn’t completely given up on love. Only now she seeks to find it in the sweet romance novels she secretly checks out from Sarah Anne’s bookmobile.

As Aaron and Kayla’s study sessions start to feel less like work and more like pleasure, they soon realize that happily ever afters don’t only happen in fiction; sometimes they happen when you least expect it.

Here’s what Publishers Weekly had to say…“Gray (A Son’s Vow) presents the enjoyable first installment in her Berlin Bookmobile series featuring Sarah Anne, a 60-something widow. Sarah Anne, who delivers library books to the Amish community, wants to be the perfect librarian… Readers will be delighted by Sarah Anne’s gentle matchmaking between Aaron, an Old Order Amish man secretly seeking to obtain his GED, and Kayla, a New Order woman who agrees to tutor Aaron as she mourns her mother’s death and her father’s descent into depression… Each of the main characters undergoes realistic personal evolutions as they are shaped by transformative powers of love, hope, and faith… A quiet, endearing tale.” 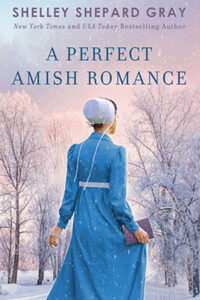