One of Amish Country’s most beloved storytellers, Wanda E. Brunstetter, is back with the highly-anticipated conclusion to her bestselling Prayer Jars series. Each of the three books in the series, published by Shiloh Run Press, follows a different young woman who finds a jar that takes her on a journey of personal reflection.

Book one, The Hope Jar, has been on the ECPA Fiction Bestsellers list for 9 straight months since its release in August 2018. Book two, The Forgiving Jar, has followed suit by remaining on the list since its respective debut in February 2019. 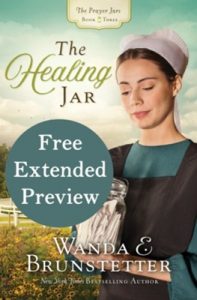 The final series installment, The Healing Jar (releasing August 6, 2019), follows the story of Lenore Lapp, an Amish schoolteacher in her late twenties still living at home with her parents and grandparents. She thought love had passed her by until she meets Jesse Smucker, a widower with a baby daughter. She quickly falls in love with them both and accepts Jesse’s proposal of marriage, but Jesse breaks off their engagement when he realizes he can’t marry only for convenience. Will Lenore resolve herself to the single life? Will she find healing for her heart and solve long-buried family secrets when she digs up an old jar in her grandmother’s garden?

One of the founders of the Amish fiction genre, Wanda E. Brunstetter recently reached another historic milestone in her decades-long writing career: With the help of her bestselling Prayer Jars series, she has officially exceeded the 11 million mark in copies sold.

Wanda is undeniably one of the most prolific authors in both the Christian and mainstream markets, with more than 100 books translated in four languages. A number of her works have frequented the nation’s most prestigious bestseller lists including the NY Times, USA Today, Publishers Weekly, ECPA, and more.

Considered a leading expert on Amish culture, she has used her vast research of Amish life and her many friendships with practicing Amish to create true-to-life stories that give her readers a refreshing taste of the simple life. In addition to her writing talents, much of her success can be attributed to her accurate portrayal of the Amish and her deep connection and dedication to her readers.

Wanda’s ancestors were part of the Anabaptist faith, and her novels are based on personal research intended to accurately portray the Amish way of life. Her books are well-read and trusted by many Amish, who credit her for giving readers a deeper understanding of the people and their customs.

When Wanda visits her Amish friends, she finds herself drawn to their peaceful lifestyle, sincerity, and close family ties.

Get a free eBook preview of The Healing Jar HERE!