A.K. Pittman is an award-winning author of thirteen novels, including the Christy-nominated Sister Wife series and the critically acclaimed The Seamstress. An enthusiast for all things writing, she leads two different writers’ groups, helping to bring new voices to the world of books. When not writing, Allison teaches middle school English, working as a conduit to introduce her students to new, fresh literature.

Pudge and Prejudice (Wander) is an homage to Jane Austen’s Pride and Prejudice, transported to the fictitious Northfield Texas High School in the year 1984. After moving to Northfield with her family, Elyse Nebbit faces the challenge of finding her place in a new school, one dominated by social status and Friday night football. When Elyse’s effortlessly beautiful older sister Jayne starts dating Charlie Bingley, the captain of the school football team, Elyse finds herself curious about Charlie’s popular and brooding best friend, Billy Fitz. Elyse’s body insecurities eventually complicate her relationship with Billy, leaving Jayne and Elyse’s exceedingly blunt friend, Lottie, to step in and help Elyse accept herself for who she is, pant size and all.

In this interview, the author shares her memories of the original book, what inspired her own spin on the tale, and how her experience as a teacher informs her fiction.

Can you tell us about the first time you read Pride and Prejudice? What stuck out to you in the story?

To be honest, the first time I read Pride and Prejudice was after I watched the 1995 BBC mini-series. I happened to have a “teaching” copy (with vocabulary and guided reading questions), and I was mostly curious about how much of the actual dialogue had been preserved in the screenplay. I would watch, then read, then watch, then read . . . I think the world found a renewed love with Austen thanks to that series.

There are several retellings and renditions of Pride and Prejudice set in various decades and locales—what made you want to write one set in 1980’s Texas?

The decade (the 80’s) was a choice of pure indulgence, so I could immerse myself in memories and nostalgia. And, it worked as a historical setting, too. As for why Texas? Mostly because I knew I wanted the Darcy character to be a football star, and while I know schools play football everywhere, there’s nothing quite like a Texas Friday Night football game.

Did you observe any notable similarities between Austen’s era and the ’80s?

Pre-social media, if a guy and a girl wanted to talk to each other, they had to . . . talk. Voices on a telephone. Visits on a front porch. Walks to and from school. With the exception of the telephone, the channels for courtship in the 80’s were exactly the same as in Austen’s time. Right down to the letters. I had a box full of notes my friends (and boyfriends) and I wrote to each other. Extensive and detailed. We’ve lost that art with social media and texting.

What are some key memories or points of nostalgia you have about the 1980s?

I remember staying up all night watching music videos on MTV. They would announce something like the new Madonna video premiering at midnight, so you’d stay up, watch it, then call a friend to talk about it. But you’d have to whisper on the phone so your parents wouldn’t hear. I remember spending hours in record stores, flipping through albums and the clack of the big plastic sleeves cassette tapes came in. I remember listening to American Top 40 every Saturday morning. I remember dropping rolls of film off at Fox Photo, then being disappointed when I picked up the prints because I’d cut off everybody’s head, or the shots were blurred. I remember when I finally got my own phone in my bedroom, and it was the first time I felt a twinge of independence.

Can you tell us a little about Elyse, your rendition of Elizabeth, and how you began imagining her?

If you had a glimpse at all the writings in every one of my high school yearbooks, you would see two words over and over: smart and funny. Elyse’s voice is so much like my own, sometimes I felt like she was speaking faster than I could type. Of every character I’ve ever created, she is the only one to have shown up full-force, fully formed. I knew she was sharp, and witty, and sarcastic, and terribly condescending—but with all that, I was still surprised at the depth of her vulnerability. I really don’t know if I can take much credit for her at all.

Why did you choose to highlight the theme of body image in your retelling?

I knew I didn’t want the initial chasm between Elyse and Billy (my Elizabeth and Darcy) to be one of class. There is a socioeconomic difference, but I knew I had to go beyond that. I’ve always gotten the idea that the arrival of Bingley and Darcy brought Elizabeth to the realization of her family’s financial situation. She knew they weren’t by any means wealthy, but it didn’t really matter until the idea of marriage was on the table. It’s the same with Elyse and her body image—the same as it is, I think, with most girls. It’s easy to be accepting of yourself until you’re thrust into the world of wanting—maybe needing—others to accept you.

What is Jane Austen’s best wisdom for high school girls?

Know your mind and don’t be swayed by what others would deem “acceptable” or “polite.” Throughout Austen novels we see her women refuse the affections of unsuitable men . . . at least until they become suitable. An Austen girl doesn’t settle for a guy just to have a guy. An Austen girl knows her worth. An Austen girl speaks up and speaks out. An Austen girl is content with her own company.

In your experience of teaching middle and high schoolers, what have you learned from students’ reactions to various works of classic literature? How do your students see themselves or aspects of their own lives in classic novels?

Sometimes I think high schoolers can appreciate the totality of the human experience through reading classic works of literature because those novels weren’t written for them. There aren’t any gimmicks or angles trying to appeal to their teenager-ness. They were written before the coining of the word “teenager”—before it became synonymous with a market. They are just good, good stories that draw on universal truth and conflict. So, for example, while Pip in Great Expectations is a young man, he doesn’t fit into any of the modern young man categories, so he can live in the pages as a character unto himself. I think students like to enjoy a story without feeling like they are supposed to identify with the character. Classic literature doesn’t come with an agenda.

What did you enjoy most about writing Pudge and Prejudice?

Pudge and Prejudice was the first novel I wrote during my professional writing career for which I had zero expectations for publication. I was between contracts and sad and I just filled my days wallowing in this familiar story set in the middle of every pleasant (and not-so-pleasant) memory I had from high school. It was drafted purely from a love of story and writing and setting and character. There are passages that, when I wrote them, I laughed myself to tears, and they still make me laugh. It was my first book to have a soundtrack—both in my head, and while I wrote.

What is your hope for readers of Pudge and Prejudice?

First, I just hope they love it. Like, love it. I want them to be entertained in the way that the first readers of Pride and Prejudice were entertained, when there weren’t so many rivals for our time and attention. I want them to get lost in the story, then go on YouTube to look up the music videos for all the songs. I want daughters and mothers (and grandmothers!) to read it and talk about it. I want them to hear the tune “Don’t Stop Believin’” from chapter 1 clear through to the end, and then I want them to play out in their own imaginations the futures of these characters. Then, I want them to go read another book! 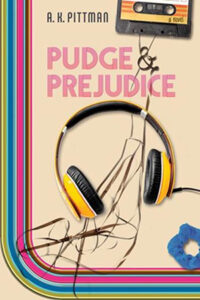 Pudge and Prejudice
A.K. Pittman
Wander
Buy the book from our store!

Pudge and Prejudice is an homage to Jane Austen’s Pride and Prejudice, transported to the fictitious Northfield Texas High School in the year 1984. After moving to Northfield with her family, Elyse Nebbit faces the challenge of finding her place in a new school, one dominated by social status and Friday night football. When Elyse’s effortlessly beautiful older sister Jayne starts dating Charlie Bingley, the captain of the school football team, Elyse finds herself curious about Charlie’s popular and brooding best friend, Billy Fitz. Elyse’s body insecurities eventually complicate her relationship with Billy, leaving Jayne and Elyse’s exceedingly blunt friend, Lottie, to step in and help Elyse accept herself for who she is, pant size and all.