The author details writing about a relationship that appears irreconcilable—and making it flourish again.

Drawing upon her experiences in Jamesport, the largest Old Order Amish community west of the Mississippi, longtime Missourian Charlotte Hubbard writes of simpler times and a faith-based lifestyle. She continues her Promise Lodge series with Light Shines on Promise Lodge (Zebra): With autumn in full brilliant color, the Amish of Promise Lodge celebrate a successful harvest—and a community rooted in deep friendship. But as cold winds of judgment cast doubt and fear, residents will need each other more than ever to weather the storm. In this interview, Charlotte reveals the inspiration behind the new book, shares the spiritual themes behind the stories, and explains how it fits into the bigger picture of the series.

Charlotte, what inspired the story in Light Shines on Promise Lodge? 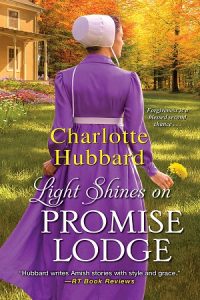 Throughout the Promise Lodge series, Gloria Lehman is a boy-crazy, flighty, airheaded young woman who can’t seem to do anything right and who makes a pest of herself with two young men who tell her right out that they don’t want to date her. I wanted to give Gloria a chance to grow up and prove herself.

Readers who have followed Gloria through the series will be pleased that she finds a young man to love —and will hopefully get a big kick from the twist in the story as the truth about Clayton King is revealed. Bishop Clayton King has come from Lancaster County PA to declare himself the new leader of Promise Lodge and he’s dead-set on putting the residents back on the straight and narrow, more conservative Old Order path to salvation.

What spiritual theme or themes play out through the novel? 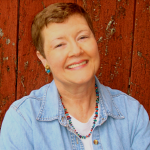 A major theme in this story deals with the question “Is there such a thing as an unforgiveable sin?” Very conservative settlements of Old Order Amish believe that if a person (like Phineas Beachey) leaves the faith to become English, he forfeits his salvation and cannot be forgiven or readmitted to the Amish faith because he has broken the vow he took at baptism.

Promise Lodge’s progressive bishop, Monroe Burkholder, must act and pray over Phineas’s reappearance in his estranged wife, Annabelle’s, life and decide whether Phineas can be forgiven—whether Jesus’ example of love and forgiveness can overrule the Old Order’s beliefs.

This book is also about Gloria’s maturation in her faith, about Cyrus and his brother, Jonathan, apologizing for a stunt they pull on Gloria and her friend, Phoebe, and receiving their forgiveness. And it’s about second chances at making relationships right and loving again.

Click thru to discover more about the Promise Lodge series!