Christian author Mike Duran’s new dystopian thriller Requiem 4 (Blue Crescent Press) details a war-torn future where scientific exorcists sweep cemeteries of “latent soul energy.” However, there’s a lot more than just ghosts in Graviton. Can the faith of military chaplain Father Aguste Lax prevail against an evil this ancient? In this exclusive Q&A, Mike shares why the horror genre is ideal for Christian storytelling, why his novel includes PG-13 content, and how he built the world of his story… 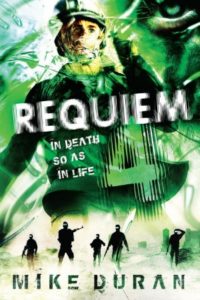 What inspired the story in Requiem 4?

Our culture’s continued fascination with ghosts has always interested me, especially in light of our drift towards a secular, materialistic worldview. How does one jibe the belief that everything is just a byproduct of chemical, material processes with a belief that something (or someone) is possibly out there?

Requiem 4 is a take-off of the contemporary “ghost hunter” phenomenon in which I attempt to mesh those two ideas–a materialistic worldview and the possibility of paranormal phenomenon. At bottom, it’s a tale about how disbelief in the devil plays right into his hands.

This book includes PG-13 content that would make some Christian readers uncomfortable. (Of course, there are parts of the Bible that are way past “PG-13.”) Why did you feel it was necessary to wrap Requiem 4‘s biblical themes in an “edgier” presentation?

For one, the story is told from the point of view of a military unit and I didn’t envision them using the exclamations “darn!” and “golly!” But more than that, I’m aiming the story at mainstream genre readers of horror and military sci-fi, not your typical Christian reader. Readers of those genres are not on the lookout for bad language. Honestly, I believe the realism is necessary to sell the religious themes of the story.

Historically, “horror” fiction is actually a very religious genre. What are the challenges of writing “Christian horror fiction” for an audience that doesn’t understand the genre’s roots?

My going theory is that the most overlooked demographic of Christian reader is also the biggest one–Christians who don’t read Christian fiction. In other words, they like stories that contain spiritual and religious themes but they don’t require the typical content restrictions.

With that said, I think there’s a larger bloc of Christians who DO read and appreciate the horror genre. Personally, I’m not trying to convince Christians to like the horror genre. My hope is that, before we start putting forth blanket condemnations, that we take time to understand the religious roots of the genre, biblical themes within it, and the use of horror and grotesque by Christian artists and writers throughout the centuries.

How did you go about building the world of your story?

The story is essentially dystopian. At its heart, I conceived a global network (UniGlobe) that is scrubbing society of religion, class, and dissenting discourse. As part of that global indoctrination, I fancied a division of the military called “sciocists,” short for “scientific exorcists.” The sciocists sweep graveyards to remove latent soul energy, or what UniGlobe label the particulate quantum residue of a departed person. The graveyards are then plowed under for the Sprawl.

I based many of the components of the science team on existing theories. For example, there has been some speculation that ghosts are explainable via quantum entanglement, that they are actually energy echoes left behind by the deceased. From this, I conjectured devices that both recognize such entanglements and vacuate, or disentangle them.

What do you want readers to take away after reading Requiem 4?

R4 is an extremely cautionary tale about the dangers of embracing a purely materialistic, atheistic worldview. In fact, I open the book with this quote from Cotton Mather: “That there is a Devil, is a thing doubted by none but such as are under the influences of the Devil.” That about sums up the gist of this tale. It is a call to arms, and a warning about spiritual lethargy.

When it comes to the topic of “horror fiction” with a Christian worldview, you literally wrote the book. What kinds of conversations has your book Christian Horror: On the Compatibility of a Biblical Worldview and the Horror Genre (Blue Crescent Press) led to? 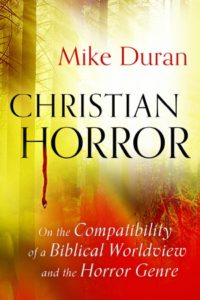 Oh, wow. I’ve received more feedback and encouragement from Christian Horror than probably anything I’ve written. Most of the feedback comes in the form of Christian writers and readers who feel alienated for being a fan of the horror genre. Others have been looking for a solid defense of the genre from a balanced evangelical perspective. Really, the response has been surprisingly refreshing.

What is it about storytelling that makes it such a powerful way to share bigger truths?

I recently finished Professor Holly Ordway’s new book, Apologetics and the Christian Imagination (Emmaus Road Publishing). Ordway was an atheist who experience a surprising conversion, in large part, from reading Tolkien’s “Lord of the Rings” and Lewis’ “Chronicles of Narnia.”

She wrote, “…although I was not interested in Christianity, I had, without knowing it, been experiencing the work of grace through my imagination. As a child and young adult, I read fantasy, fairy tales, and myths, and especially fell in love with the Chronicles of Narnia and the Lord of the Rings. I didn’t know that I was encountering God’s grace through those books, but in fact I was.” (p. 9)

Truth is, stories can go places preaching can’t. Storytelling is powerful because it engages the reader at a narrative level, allowing truths and images to sneak in past all our censors and self-defenses. Maybe that’s why Jesus told so many stories, huh?