Nashville, TN (October 24, 2020)
A fast-paced spiritual thriller with contemporary flair and a strong biblical foundation, Darkness Comes In Like a Flood, by Richard Nathan and Linda Nathan, released Tuesday, October 13, on Amazon and other sites. It’s the second novel in their Omega Point Series.

Book Synopsis:
Loren and Eve Montcrest have just become Christians—and the battle explodes! Plunged after their baptism into a fiery spiritual crucible, Loren and Eve face the venomous assaults of the leaders of Seattle’s Arcane Institute in the year 2051, as they fight to either win back or destroy their old disciples. But the new Christians are under the wise care of the head of the underground church, Alexander Renkin. Alexander, though, is in danger himself as the outward head of the evil KINDness Church. The battles intensify as Loren and Eve painfully struggle with their sin, the dark world, and its principalities and powers. Meanwhile, Alexander wonders—how much will they be willing to sacrifice and suffer for their new faith? But God’s love and hope shine through in spite of everything.

Book 1, The Glittering Web (Redemption Press 2019) is a fast-paced thriller with contemporary flair and a strong biblical foundation that plays on today’s fascination with paganism and witchcraft to plumb their deceptive nature. It hit #1 in four categories in the Amazon Kindle free store as a new release in August 2019: Christian Fantasy, Christian Futuristic Fiction, Religious Science Fiction & Fantasy, and Metaphysical Fantasy E-books. 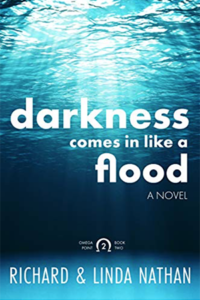 Buy Darkness Comes In Like a Flood  from Amazon HERE: