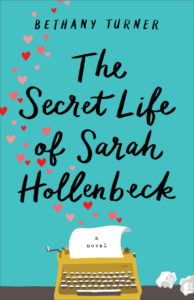 Christian romance author Bethany Turner explodes onto the scene with her debut novel, The Secret Life of Sarah Hollenbeck (Revell). Romance novelist Sarah Hollenbeck finds that now that she’s a Christian, she can’t write the same kinds of books anymore—and the fact that she’s falling in love with her pastor doesn’t make things any easier. In this Q&A, the author shares why she wrote about an author, her favorite part of the book to write, and what she hopes readers get out of it…

Tell us a little about The Secret Life of Sarah Hollenbeck.

Sarah is the author of some bestselling romance books that are so provocative and steamy her name becomes synonymous with the genre. But when Sarah becomes a Christ follower, she must try and maneuver away from her scandalous reputation—easier said than done since the books are still selling like wildfire, and she’s being hounded for the film rights.

Sarah is determined to start a new life in which she can actually spread good and light to the world, but of course the darkness of the past isn’t going to go away easily. Things get even more complicated when she begins falling in love with Ben Delaney, who happens to be her new pastor.

Why did you decide to write about an author?

Writing a book is not an insignificant thing for most people. It’s a labor of love, and in most cases authors put so much of themselves into the creation of their work. And then for that work to go on and become a cultural phenomenon—that’s a major thing!

I was fascinated by the idea of an author putting in all of that blood, sweat, and tears only to undergo a heart-level change that turns the work and all it stands for into an obstacle for the author as she tries to live the life she believes God is calling her to live.

Do you see yourself in Sarah’s character?

I do! In so many ways. For one thing, we can both be counted on to contribute an applicable film or television reference to every situation. And we both believe that almost all things worth knowing can be gleaned from The Sound of Music.

But more seriously, although Sarah is a brand-new Christ follower and I accepted Jesus into my heart thirty years ago, we share many of the same struggles in our faith—most notably when it comes to letting go of our hard-won control and letting the Lord take the lead.

What inspired the relationship between Sarah and her pastor? Are you a romantic?

As far as the world is concerned, Sarah’s and Ben’s careers are on opposite ends of the morality spectrum. I was intrigued by the possibilities that existed as they each attempted to understand the world the other had lived in—in Ben’s world, people don’t think Sarah is worthy of him; in Sarah’s world, it’s difficult for anyone to think their relationship isn’t either (a) illicit or (b) dull.

I loved creating a relationship that is sexier than you might expect for the pastor and much more innocent and pure than anyone would see coming for the steamy romance novelist. And yes! I am absolutely a romantic! Too much Jane Austen throughout my life has seen to that. (Though is there really any such thing as too much Jane Austen?)

What was your favorite part of this book to write?

I feel okay saying this because my husband is aware of my feelings for my fictional characters . . . I fell madly, deeply in love with Ben Delaney, more than any other leading man I’ve ever written, and my favorite part of writing this book was watching Sarah fall in love with him as well. Sarah is such a goofball in so many ways, and she just couldn’t help but get herself into embarrassing situations and say embarrassing things she didn’t mean to say. So that was fun!

But what really made it so great was helping Sarah realize that, with Ben, she didn’t have to be embarrassed. He gives her a confidence she’s not used to feeling, and it was very powerful for me to watch Sarah grow as a person and in her faith, there in the safe place Ben provided.

What lesson(s) do you hope readers will take away from reading your book?

One thing that was really important for me to communicate was that just because a man and a woman in a romantic relationship have chosen to put their faith and their relationships with the Lord above all else doesn’t mean it will always be easy to honor those beliefs and commitments. Ben and Sarah face temptation and find themselves in situations they should have tried harder to avoid.

And I thought it was important that it be reflected every bit as much in Ben’s spiritual journey as it is in Sarah’s. Sarah’s faith is new, but Ben’s is not. Not only is he a longtime Christ follower . . . he’s a professional Christ follower! But he’s every bit as human and flawed as she is—and as we all are. I believe Christians do a disservice to our faith when we act as if we’ve got it all under control, rather than keeping our focus on the Savior who wants nothing more than for us to relinquish control to him.

In what way would you say your faith is worked into the book?

Sarah is in her mid-thirties when she becomes a Christian, and she really does feel as if she’s experiencing a rebirth—which makes it all the more jarring for her when her pre-salvation past doesn’t go away the moment she says, “Amen.”

As I was writing Sarah’s story, the Lord was allowing me to experience a bit of a rebirth as well. He led me to give up the career I had devoted my entire adult life to, and in addition to putting wind in the sails of my career as an author, he guided me toward full-time vocational ministry. Though my faith is not nearly as new as Sarah’s, I feel like I was given the opportunity to fall in love with Jesus all over again, through Sarah’s eyes and my own.

This is your first novel. What did you learn about the publishing process as you went along?