The ancient Reaper War is coming to an end. But a greater darkness is rising… 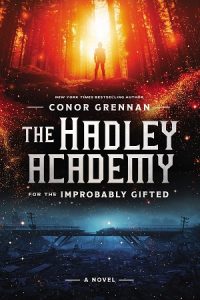 Jack Carlson is suffering through another awkward school day when he suddenly finds himself transported to the Hadley Academy, a secret institution that tracks teens with unlikely gifts and trains them to protect the world from a secret squad of killers. Despite indications that he is the one prophesied to end the ancient Reaper War, Jack appears to have no extraordinary abilities. Can Hadley’s rawest recruits push past personal struggles and enormous doubts, develop their dormant powers, and stop the spreading evil?

New York Times bestselling author Conor Grennan’s new middle-grade fantasy novel The Hadley Academy for the Improbably Gifted (Thomas Nelson) follows a boy’s unlikely journey to save humanity as he unravels his true identity and the responsibility it comes with. For ages 10 and up, The Hadley Academy for the Improbably Gifted is a dystopian fantasy novel that explores themes of sacrifice, darkness, and the power of friendship.

This action-packed novel features a riveting plot, relatable characters, and humorous dialogue that will captivate young readers. The diverse cast of characters will appeal to a wide audience, including those who sometimes wonder what their gifts might be. Each of the short chapters opens with a line drawing illustration.

Fans of the Hunger Games, the Chronicles of Narnia, Divergent, Maze Runner, and Rick Riordan’s books will find themselves at home in the battle for good at the Hadley Academy.

Below, watch a replay of a live Q&A with Conor Grennan did for The Hadley Academy for the Improbably Gifted

Conor Grennan is the author of the New York Times bestselling and #1 international bestselling memoir Little Princes: One Man’s Promise to Bring Home the Lost Children of Nepal. The memoir shares Grennan’s humanitarian work as the founder of Next Generation Nepal (NGN), a nonprofit organization dedicated to reconnecting trafficked children with their families in Nepal.

The Hadley Academy For The Improbably Gifted
Connor Grennan
Thomas Nelson
Buy the book from our store!